Has Apple totally lost its mind?

Has Apple totally lost its mind? 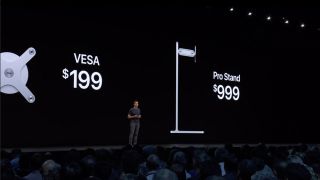 Good design is priceless, right? That’s certainly the angle we reckon Apple is spinning with its latest product release. Unveiled at the company’s annual Worldwide Developers Conference yesterday, the long-awaited Mac Pro, Apple’s first update to its standalone machine since 2013. And we weren’t disappointed. It is, in our humble opinion, a thing of beauty, a total powerhouse and the price, while eye-watering, wasn’t a complete surprise (although we weren’t quite expecting it to be that much).

However, what we’re sure Apple wasn’t expecting is news of the new Mac Pro stand completely overshadowing its release. Yes, you read that right – the stand. Apple’s new Mac Pro, which let’s just remind ourselves starts at a whopping $4,999, doesn’t come with an actual stand to hold it up. At least, not included in the price, that is. The Pro Stand, sold separately, will set you back a further $999.

One thousand dollars for a computer stand. What the…?

We are, unsurprisingly, not the only ones a little dumbfounded. Here are some of our favourite reactions to the news on Twitter :

Can anyone explain to me why this Pro Stand costs more then literally everything I own? Can someone else explain WHY you need to spend $999 on a computer stand?#WWDC19 pic.twitter.com/qPtHEY3U9u4 June 2019

But it’s okay because the fact that it’s a fully counterbalanced stand that apparently makes the Pro Display XDR feel weightless and easy to adjust totally justifies the cost, right? Okay, okay so it obviously does more fancy stuff than that, but there’s nothing that we can see that genuinely justifies such an extortionate amount of money.

The high cost of Apple’s new standalone display will sadly have already made it unobtainable to many an artist and designer. And to add an extra jaw-dropping cost to simply be able to stand the thing up just adds further insult to injury. Right now we’re really struggling to understand what on earth Apple was thinking, or which creative professionals its targeting with this new product range. Extremely wealthy ones, presumably.

If you’re looking for something more affordable, we’ve got an excellent round up of the best computers for graphic design. That said, if you’ve got a spare $6000 lying around, grab one and let us know what you think. We’ll stick to the built-in supported screen of a MacBook Pro in the meantime, thanks.