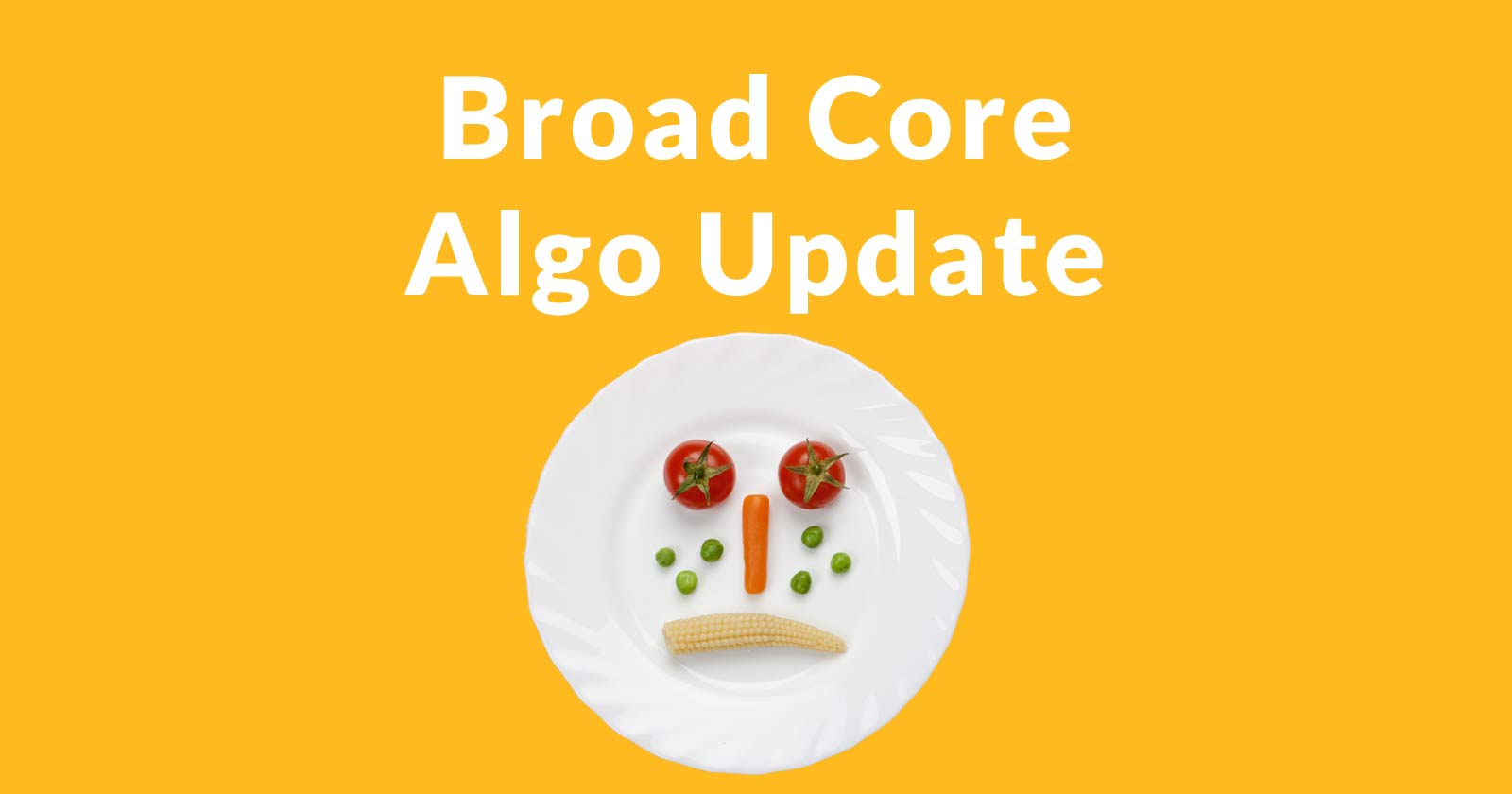 Two high authority websites have lost traffic from the June Core Algorithm Update. Their losses challenge the conventional thinking that expertise, authoritativeness and trustworthiness (E-A-T) were the path for recovering from an update.

Many authoritative websites have lost rankings in the June 2019 Core Algorithm Update. This clearly exposes a weakness in the theory that factors such as E-A-T (Expertise, Authoritativeness and Trustworthiness) are directly associated with ranking declines. These sites had no problems with expertise, authority or trustworthiness.

A UK news site, The Daily Mail, suffered major traffic declines due to the Google update. Now, a bitcoin news site, CCN.com is reporting that they are shutting down because of the Google Update.

Our daily revenue is down by more than 90%.”

In my opinion, a failing of Google’s Webmaster Help Forum is that they offer the same rote advice. When the advice does not fit the situation, the forum sometimes turns against the person asking for help nitpicking perceived failures but never actually diagnosing why a site may have lost rankings.

“We have tried to find out why our stories are no longer visible on Google by asking for guidance in Google’s Webmasters Forum. While we appreciate the help of the experts from the Google Forum, their theories for why Google has decided to basically “shut down” CCN does not appear to be entirely accurate.”

Among the less than useful advice was this response:

“The website has no information about the valid organization of the publisher.

The website has information about some organization with the name CCN, however, this brand does not have unambiguity and a fragment of Google Knowledge Graph in the SERP.

The person offering help also advised CCN to register the news site with Google My Business. 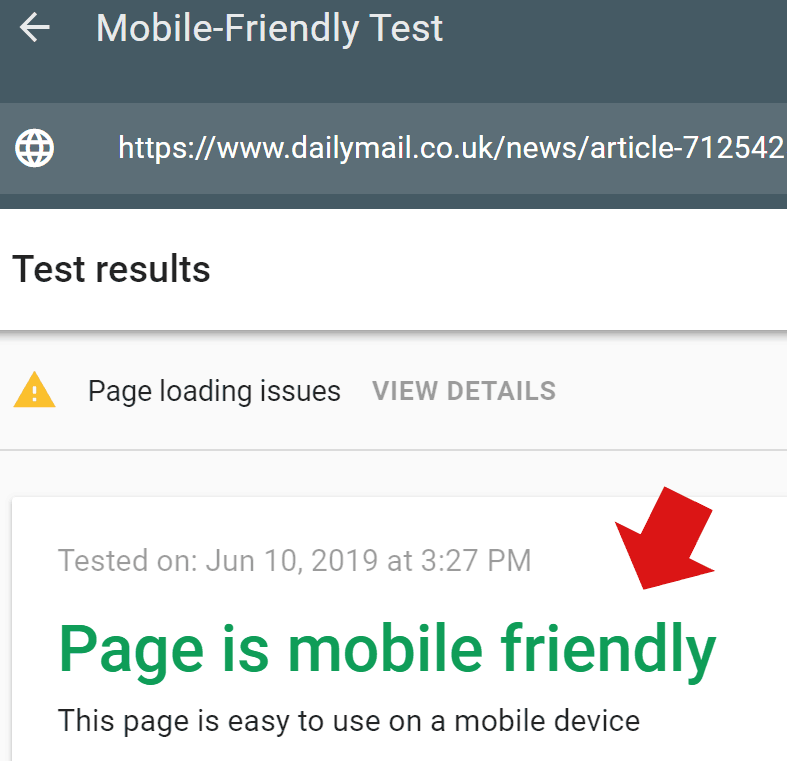 There are some page loading errors but those are scripts that are blocked by third party ad servers, something common across the Internet. The rest are warnings about things like deprecated scripting.

Is that enough to kill the rankings by 50%? What do you think?

The Webmaster Help Forum might as well be a chatbot because all the responses are essentially pre-scripted. The advice is mostly ripped from the pages of the Quality Raters Guidelines.

Google’s Algorithms are Not Summed Up by Quality Raters Guidelines

Google’s Algorithm updates cannot be summed up by what’s in the Quality Raters Guidelines. So why do SEOs depend on it to solve Google update problems?

Danny Sullivan tweeted that the Quality Raters Guidelines can be used as a reference guide for creating quality content.

Here is what Danny Sullivan tweeted:

“We tell lots of things to do. Improve site speed. Consider secure. Etc. But that’s not what this update was about. It’s broad. And respectfully, I think telling people there’s no particular thing to “fix” is indeed helpful. It means, hopefully, they think more broadly…”

“Want to do better with a broad change? Have great content. Yeah, the same boring answer. But if you want a better idea of what we consider great content, read our raters guidelines. That’s like almost 200 pages of things to consider: “ 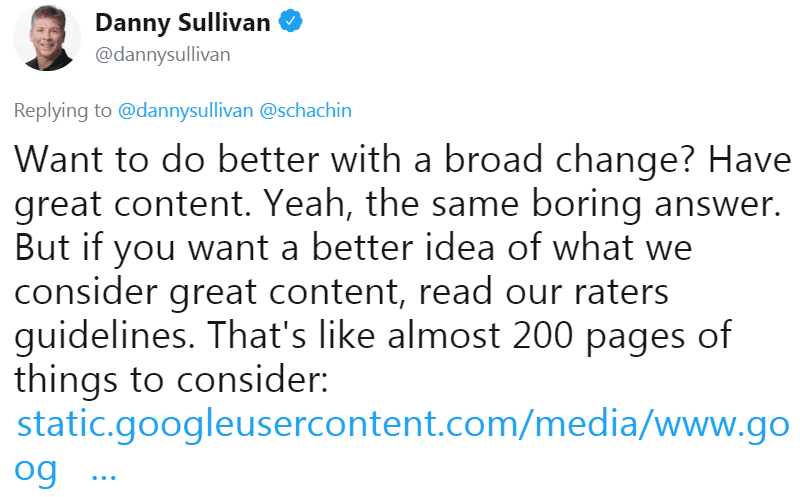 An SEO responded to Danny by correctly pointing out that the Quality Raters Guidelines is for content creation, not for diagnosing why a site is no longer ranking in the search results:

“The guide is GREAT for creation guidelines, not diagnostics. Especially if you just dropped off the map.”

Quality Raters Guidelines are Not a Diagnostic Tool

The quality raters guidelines is helpful. But Google’s algorithms do more than check if a page passes a “quality” test.

Google’s mission is “to organize the world’s information and make it universally accessible and useful. ” Web page quality is one part of that. Relevance and usefulness to a user making a search query is a major part of the algorithm.

So if a site has lost rankings, while content quality may be an issue, of higher concern is figuring out why the site is no longer relevant to a user. Google’s algorithm focuses on returning the most relevant content, regardless of coding errors or whether the article author has their contact information listed somewhere.

Quality Raters Guidelines are Not a Diagnostic Cheat Sheet

There is a tendency to seek answers in the Quality Raters Guidelines for update related ranking problems. This is a mistake. A broad core algorithm update encompasses a wide range of improvements designed to help Google understand search queries, understand and rank web pages, and to be useful to users.

Page Quality is just one ranking factor out of many other factors.

Goodness… Do people truly believe that hacking Google is as easy as improving author credentials?

Apparently so. As ridiculous as this may sound, that’s what some in Google’s Webmaster Help forum offered as a solution to The Daily Mail, a well known news organization.

The focus on E-A-T to solve Google update problems is a mistake because it ignores the fact that Google’s algorithm is larger than just expertise, authoritativeness and trust. Those are just three factors out of over 200 factors.

It’s called a Broad Core Algorithm Update. The word “broad” is defined as having a wide scope, covering a large number of topics.

Focusing on E-A-T as the root cause of update problems is a huge mistake.

Assuming that E-A-T is the solution to update problems ignores Google’s advice that there is nothing to fix.

When an SEO recommends E-A-T to solve an update related ranking problem, they are saying that the reason the site doesn’t rank is because there is something broken that needs fixing.

But Google says there is nothing to fix.

One is right. One is wrong.

Google’s guidance that there is nothing broken on your site to fix is a huge clue. So why ignore it?

What Does Nothing to Fix Mean?

Nothing to fix can mean that:

As you can see, there are so many areas that Google can improve in an algorithm, the list could literally run to thousands of improvements.

If the list of things that Google could improve is so long, why in the world does the search industry focus on the same four things, Quality, Expertise, Authoritativeness, and Trust?

As can be seen by the plight of major sites like CCN and the Daily Mail, the idea that Google’s Broad Core Updates could be reduced to four baby-food level ranking factors is not helpful.