Every year, the tech sector keenly awaits Mary Meeker’s annual Internet Trends Report, which looks at the key industry shifts and developments to be aware of, in order to help marketers, and others, plan for the next major evolutions.

Meeker, a venture capitalist, and a former partner at Kleiner Perkins Caufield & Byers, has been heavily involved in the tech industry since the early 80’s, giving her significant insight, and oversight, into the development of the web and its subsequent offshoots.

This year, Meeker’s full report is a whopping 333 slides, but here’s an overview of some of the key social media and digital marketing-related elements highlighted in this latest update.

First off, Meeker looks at the growth of internet adoption, which is slowing as regions work on new infrastructure to facilitate connection. It’s amazing to consider that around 50% of the world is still not connected to the internet, which highlights the opportunities for expansion, but also, the challenges now faced in getting the rest of the world online. 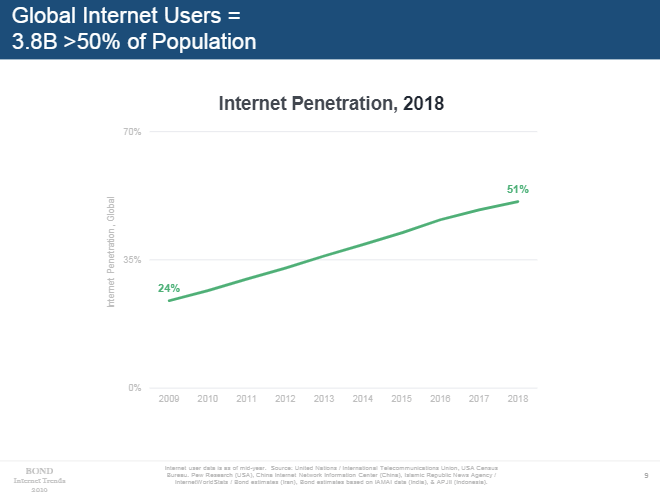 And if you were wondering why social apps like LinkedIn and Facebook are now increasingly keen to launch features that will appeal to Indian users, this may provide some context. 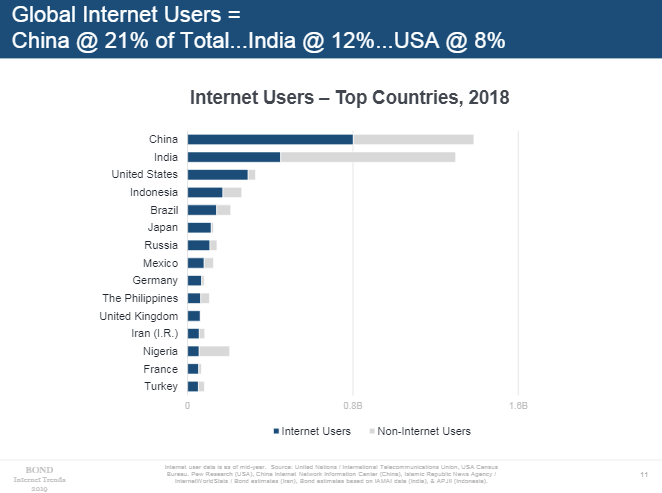 China remains largely walled off to outside operators, but India now not only has more users than the US, but far more opportunity for expansion to the next billion users. Similar opportunities also exist in the Asia Pacific region – next time you see a new feature being launched in another nation, this context may help you make sense of such.

Meeker also notes the increase in mobile device usage, which was also recently highlighted in a new report from eMarketer. 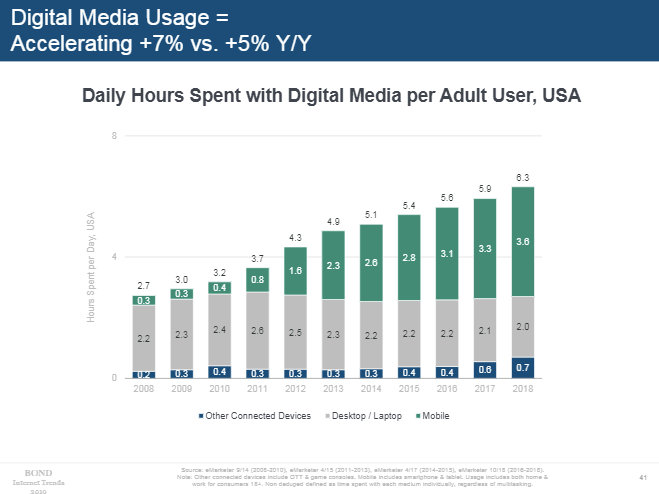 Interesting to note that, while mobile usage is growing, desktop usage is not declining at a rapid rate, while the growth in ‘connected device’ usage has ramped up significantly in the past couple of years. 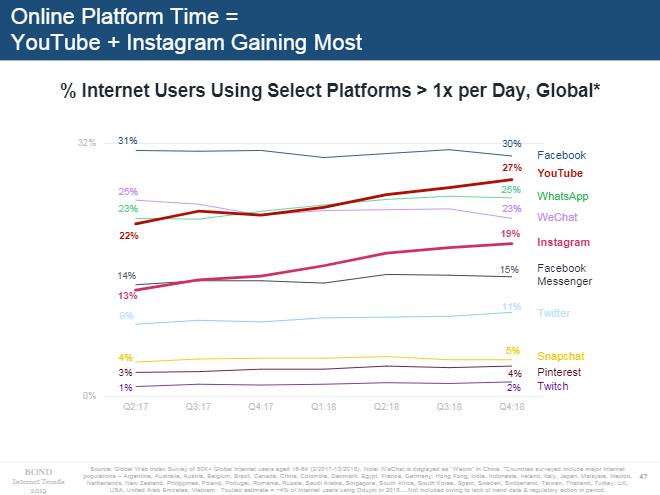 That aligns with various other reports which have suggested that users are posting and engaging on Facebook less often – though it is also worth noting the limited growth of Facebook Messenger and WhatsApp here, which is where much of that engagement was believed to be switching.

But where attention actually appears to be moving is Stories, which has seen a significant rise in the last few years. 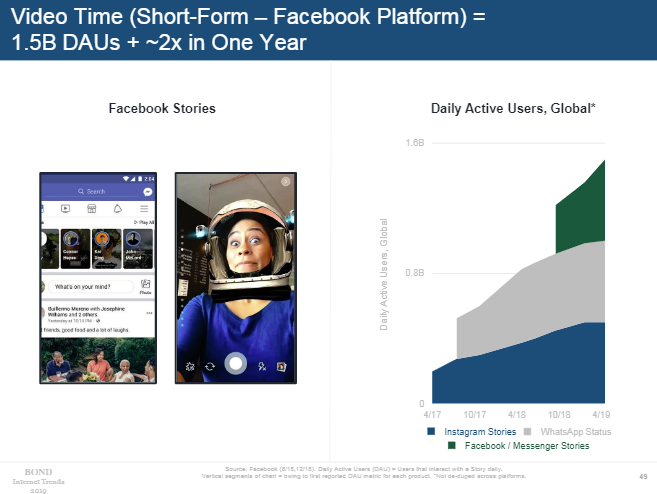 Facebook has been talking up the potential of Stories for some time, and we should probably be listening, as they have the data insight to see where attention is truly focused. As has been underlined by various reports, Stories is where attention is increasingly shifting – and as such, likely where marketer attention should be turning also.

Also, have you ever wondered by so many people seem to be starting their own podcast these days? 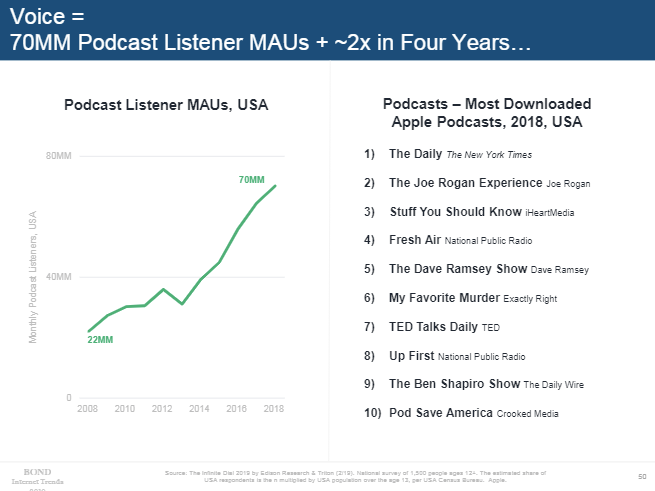 Another key element Meeker focuses on is the growth in gaming content, which may not seem like a massive opportunity. But it is very clearly growing. 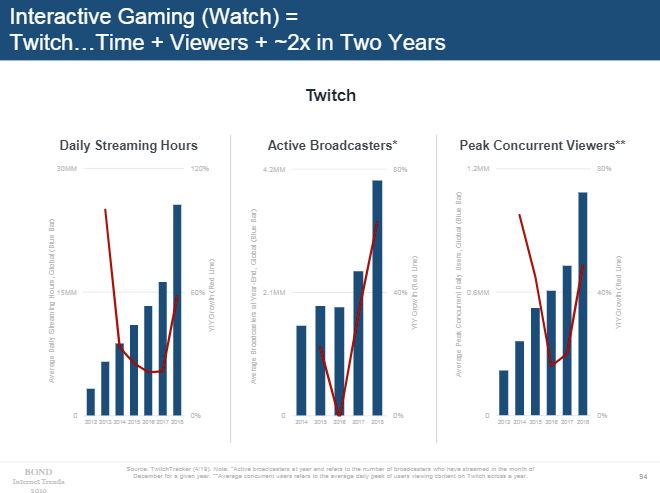 The growth in attention for gaming-related content is important to note in relation to the next big shift. Gaming has become so big, and now gathers so much attention, that the new celebrities are all stemming from gaming-related content. You may not be overly interested in, say PewDiePie, but your kids probably are, and if you ask them about their favorite celebrities, you’ll increasingly hear fewer references to established TV stars, and more references to YouTubers who have at least some link to gaming culture.

If you’re looking to connect with the next generation, you should be maintaining at least some awareness of gaming culture, which is where attention is increasingly shifting.

Meeker also takes a look at rising trends in privacy and the impacts of social media, with a specific focus on the rising health concerns related to social media use. 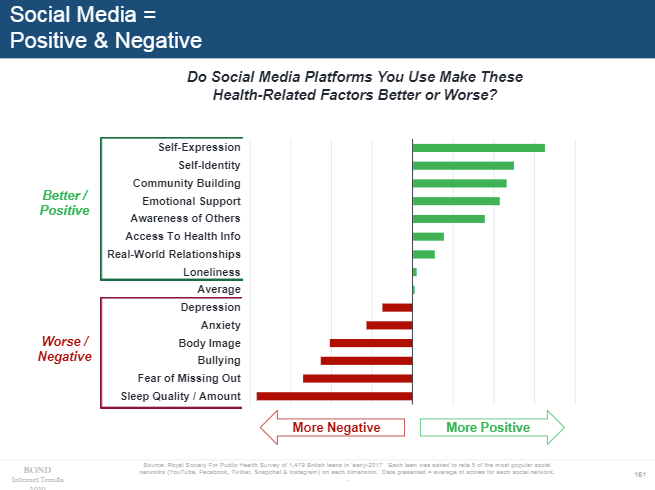 This, or a variation of it, is a likely to remain a key chart of focus for some time, particularly as more questions are raised in regards to how social media platforms can be used to spread political messaging, and misinformation.

Is social media a positive for society? I would argue that it is, but that the various feed algorithms, at least in their current forms, are not. But those algorithms are also what make social platforms more compelling – dare I say ‘addictive’ – so the chances of the platforms reducing their influence are not great.

Overall, and as always, there’s a heap to consider in the latest Mary Meeker Internet Trends report, including far more detail on each specific element, which you can check out for yourself here. If you’re interested in the more in-depth market nuances, or deeper dives into each of the trends above, the full report showcases a range of different angles and elements to help better inform your approach and understanding.