A decade ago we used to say “search is the universal interface.” Slowly, voice is supplanting it — emphasis on the word slowly. Despite the hype around voice and virtual assistants, which I have contributed to, adoption is seemingly not happening as quickly as expected. A new report from SUMO Heavy underscores this idea.

About 30% are active users. The survey of just over 1,000 U.S. adults found that nearly half (46%) of respondents never use virtual assistants, emphasis on “never.” Another group (19%) use virtual assistants “rarely” (less than monthly). These are effectively non-users. Together these two groups represent 65% of the audience, while 29% (daily and weekly) is the active user base.

consumer survey from Uberall (April, 2019) discovered that 52% of respondents “never” use voice search. This is consistent with the SUMO Heavy findings.

Majority of usage happening on smartphones. It comes as no surprise that the bulk of voice usage is happening on smartphones, which have the most distribution of the various devices that feature virtual assistants. It’s interesting to note, in the graphic below, that there’s a fair amount of usage on the desktop (15%), which may be Cortana on Windows PCs, as well as in-car systems (11%).

Because virtual assistants are the defining feature of smart speakers, the 18% usage figure below is equivalent to device ownership. This would suggest a significantly lower smart speaker penetration rate (~46 million) in the U.S. than other surveys. 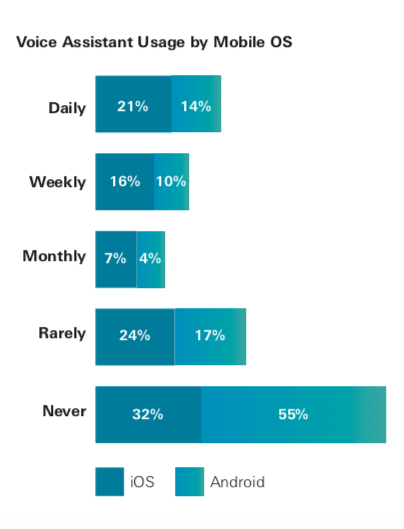 optimize content for voice discovery. There are still millions of queries coming through on smartphones and smart speakers and that will continue to grow — over time.