What Is Universal Search? via @beanstalkim

What Is Universal Search? via @beanstalkim 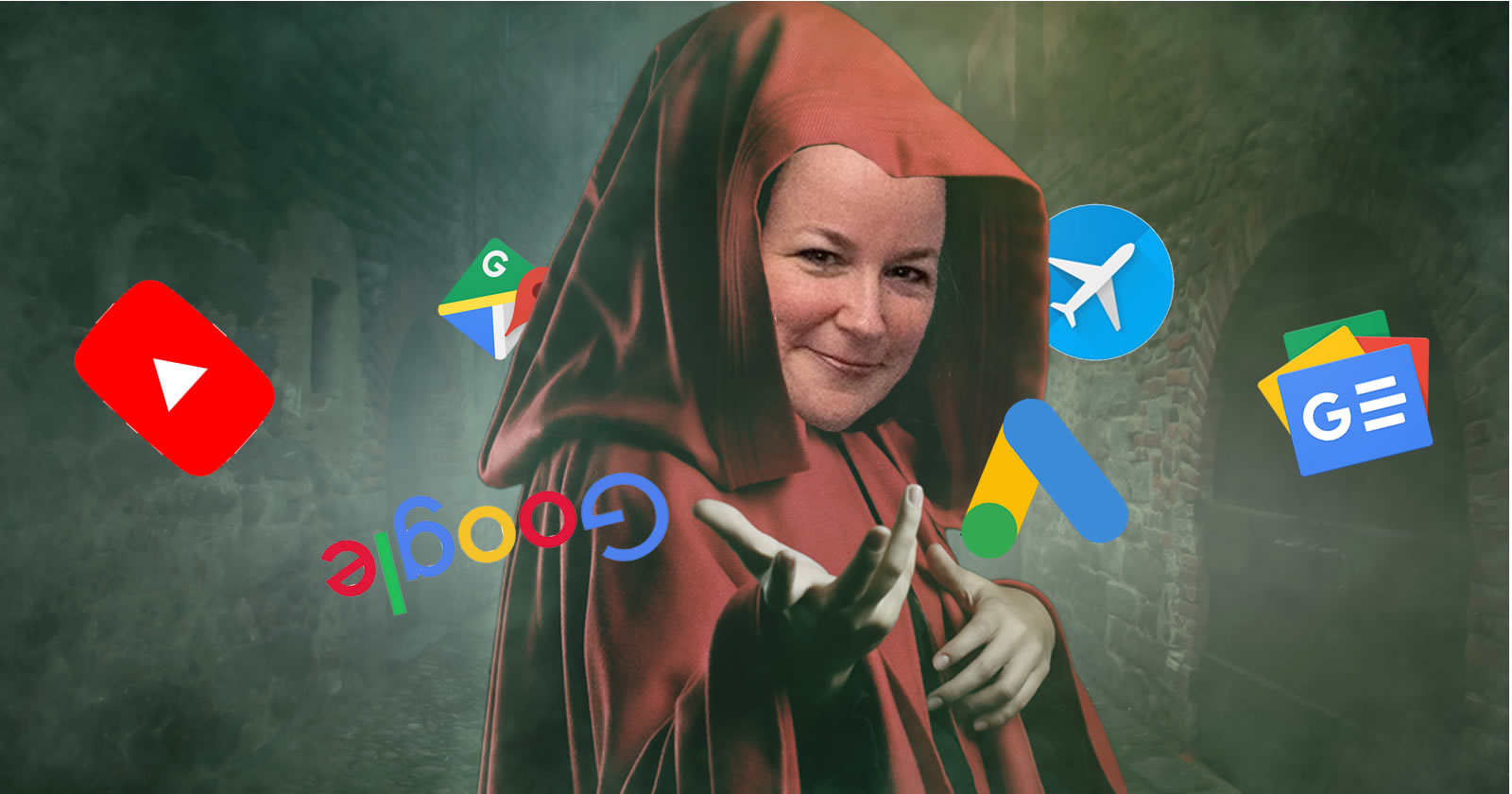 What Is Universal Search?

There are a few definitions for universal search on the web, but I prefer hearing it from the horse’s mouth on things like this.

While Google hasn’t given a strict definition that I know of as to what universal search is from an SEO standpoint, they have used the following definition in their Search Appliance documentation:

“Universal search is the ability to search all content in an enterprise through a single search box. Although content sources might reside in different locations, such as on a corporate network, on a desktop, or on the World Wide Web, they appear in a single, integrated set of search results.”

Adapted for SEO and traditional search, we could easily turn it into:

“Universal search is the ability to search all content across multiple databases through a single search box. Although content sources might reside in different locations, such as a different index for specific types or formats of content, they appear in a single, integrated set of search results.”

What other databases are we talking about? Basically:

These range from reviews to related searches to traffic patterns to previous queries and device preferences.

I remember a time, many years ago, when there were 10 blue links… 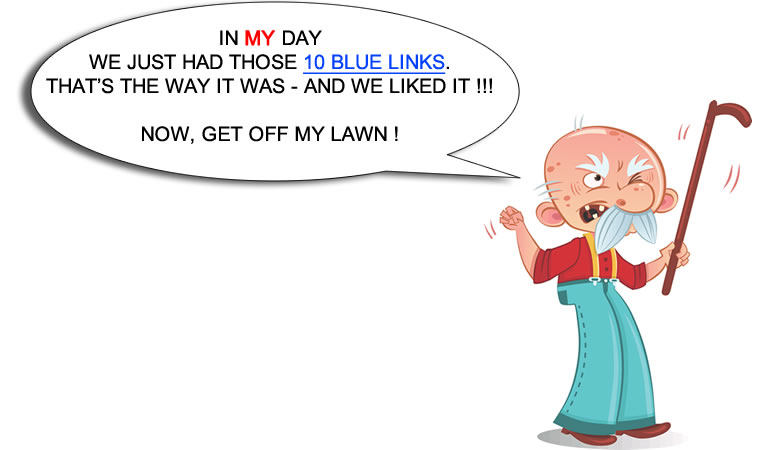 It was a crazy time of discovery. Discovering all the sites that didn’t meet your intent or your desired format, that is.

And then came Universal Search. It was announced in May of 2007 (by Marissa Mayer, if that gives it context) and rolled out just a couple months after they expanded on the personalization of results.

The two were connected and not just by being announced by the same person. They were connected in illustrating their continued push towards Google’s mission statement:

“Our mission is to organize the world’s information and make it universally accessible and useful.”

Think about those 10 blue links and what they offered. Certainly, they offered a scope of information not accessible at any point in time prior, but they also offered a problematic depth of uncertainty.

Black hats aside (and there were a lot more of them then), you clicked a link in hopes that you understood what was on the other side of that click and we wrote titles and descriptions that hopefully fully described what we had to offer.

Search was a painful process, we just didn’t know it because it was better than anything we’d had prior.

Then there was Universal Search. Suddenly the guesswork was reduced.

Before we continue, let’s watch a few minutes of a video put out by Google shortly after Universal Search launched.

The video starts at the point where they’re describing what they were seeing in the eye tracking of search results and illustrates what universal search looked like at the time.

OK – notwithstanding that this was a core Google video, discussing a major new Google feature and it has (at the time of writing) 4,277 views and two peculiar comments – this is an excellent look at the “why” of Universal Search as well as an understanding of what it was at the time, and how much and how little it’s changed.

How Does It Present Itself?

We saw a lot of examples of Universal Search in my article on How Search Engines Display Search Results.

Where then we focused on the layout itself and where each section comes from, here we’re discussing more the why and how of it.

At a root level and as we’ve all seen, Universal Search presents itself as sections on a webpage that stand apart from the 10 blue links. They are often, but not always, organically generated (though I suspect they are always organically driven).

This is to say, whether a content block exists would be handled on the organic search side, whereas what’s contained in that content block may-or-may-not include ads.

So, let’s compare then versus now, ignoring cosmetic changes and just looking at what the same result would look like with and without Universal Search by today’s SERP standards. 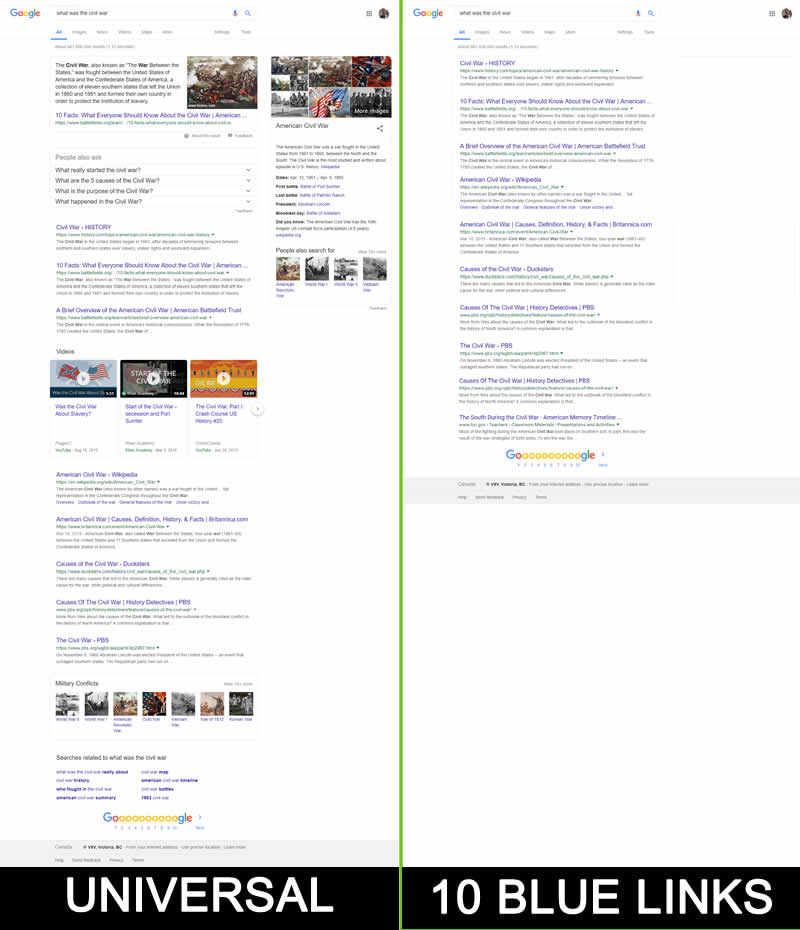 This answers two questions in a single image.

It answers the key question of this section, “How does Universal Search present itself?”

This image also does a great job of answering the question, “Why?”

Imagine the various motivations I might have to enter the query [what was the civil war]. I may be:

The possibilities are virtually endless.

If you look at the version on the right, which link would you click?

How about if you prefer video results?

The decision you make will take you longer than it likely does with Universal Search options.

And that’s the point.

The Universal Search structure makes decision making faster across a variety of intents, while still leaving the blue links (though not always 10 anymore) available for those looking for pages on the subject.

In fact, even if what you’re looking for exists in an article, the simple presence of Universal Search results will help filter out the results you don’t want and leaves SEO pros and website owners free to focus our articles to ranking in the traditional search results and other types and formats in appropriate sections.

How Does Google Pick the Sections?

Let me begin this section by stating very clearly – this is a best guess.

As we’re all aware, Google’s systems are incredibly complicated. There may be more pieces than I am aware of, obviously.

There are two core areas I can think of that they would use for these adjustments.

Now, before you say, “But Google says they don’t use user metrics to adjust search results!” let’s consider the specific wording that Google’s John Mueller used when responding to a question on user signals:

But for individual pages, I don’t think that’s something worth focusing on at all.”

So, they do use the data. They use it on their end, but not to rank individual pages.

What you can take this as it relates to Universal Search is that Google will test different blocks of data for different types of queries to determine how users interact with them. It is very likely that Bing does something similar.

Most certainly they pick locations for possible placements, limitations on the number of different result types/databases, and have determined starting points (think: templates for specific query types) for their processes and then simply let machine learning take over running slight variances or testing layouts on pages generated for unknown queries, or queries where new associations may be attained.

For example, a spike in a query that ties to a sudden rise in new stories related to the query could trigger the news carousel being inserted into the search results, provided that past similar instances produced a positive engagement signal and it would remain as long as user engagement indicated it.

It is virtually a given that a search engine would use their own query data to determine which sections to insert into the SERPs.

Implying that most such searchers are looking for restaurants it makes sense that in a Universal Search structure, the first organic result would not be a blue link but:

It is very much worth remembering that the goal of a search engine is to provide a single location where a user can access everything they are looking for.

At times this puts them in direct competition with themselves in some ways. Not that I think they mind losing traffic to another of their own properties.

Let’s take YouTube for example. Google’s systems will understand not just which YouTube videos are most popular but also which are watched through, when people eject, skip or close out, etc.

They can use this not just to understand which videos are likely to resonate on Google.com but also understand more deeply what supplemental content people are interested in when they search for more general queries.

I may search for [civil war], but that doesn’t mean I’m not also interested in the Battle at Antietam specifically.

So, I would suggest that the impact of these other databases does not simply impact the layouts as illustrated in Universal Search but that these databases themselves can and likely are being used to connect topics and information together and thus impacting the core search rankings themselves.

So, what does this all mean for you?

For one, you can use the machine learning systems of the search engines to assist in your content development strategies.

Sections you see appearing in Universal Search tell us a lot about the types and formats of content that users expect or engage with.

Also important is that devices and technology are changing rapidly. I suspect the idea of Universal Search is about to go through a dramatic transformation.

This is due in part to voice search, but I suspect it will have more to do with the push by Google to provide a solution rather than options.

A few well-placed filters could provide refinement that produces only a single result and many of these filters could be automatically applied based on known user preferences.

I’m not sure we’ll get to a single result in the next two to three years but I do suspect that we will see it for some queries and where the device lends itself to it.

If I query “weather” why would the results page not look like:

In my eyes, this is the future of Universal Search.