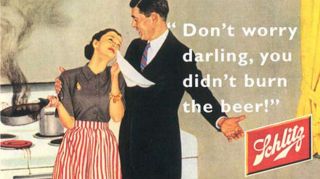 It is now illegal to include harmful gender stereotyping in UK advertising, as a new law from the Committee of Advertising Practice (CAP) comes into force. The law dictates that:

[Advertisements] must not include gender stereotypes that are likely to cause harm, or serious or widespread offence.

This applies to broadcast and non-broadcast media, including print ads, and online and social media advertising. Ad creators have had a six-month grace period to get in line with the new laws, but as of now they’re being enforced in full. Any complaints will be assessed on a case-by-case basis, considering the content and context to determine if they violate the new guidelines.

The updated rules come as a result of a review of gender stereotyping in advertising by the ASA (Advertising Standards Agency), the body that works with CAP to write the UK’s Advertising Codes.

“Our evidence shows how harmful gender stereotypes in ads can contribute to inequality in society, with costs for all of us,” says ASA chief executive Guy Parker. “Put simply, we found that some portrayals in ads can, over time, play a part in limiting people’s potential.

“It’s in the interests of women and men, our economy and society that advertisers steer clear of these outdated portrayals, and we’re pleased with how the industry has already begun to respond.”

What gender depictions are now illegal?

Prior to this change in legislation, the UK Advertising Codes dictated that adverts shouldn’t cause harm or serious offence, including on the grounds of gender, but did not specifically address gender stereotypes.

Further research following the original investigation found that the use of gender stereotypes isn’t always harmful, and as a result has not been banned completely. The CAP gives some examples of stereotyping that could violate the new regulations. These include:

However, it states that ads showing ‘a woman doing the shopping or a man doing DIY’ would not be problematic, neither would the representation of one gender only in an advert for a product aimed specifically at that one gender.

CAP will review the effect of the regulation change in 12 months’ time. Read more about the new rule here.

While we’ve come a long way when it comes to gender equality in advertising and branding, recent misfires – including BrewDog’s Pink IPA and NatWest’s patronising apology to female customers – prove we’re not quite there yet. Here’s hoping the new laws mark an era of more responsible gender representation in advertising.