Travel company reclaims the phrase ‘go back to Africa’

Travel company reclaims the phrase ‘go back to Africa’ 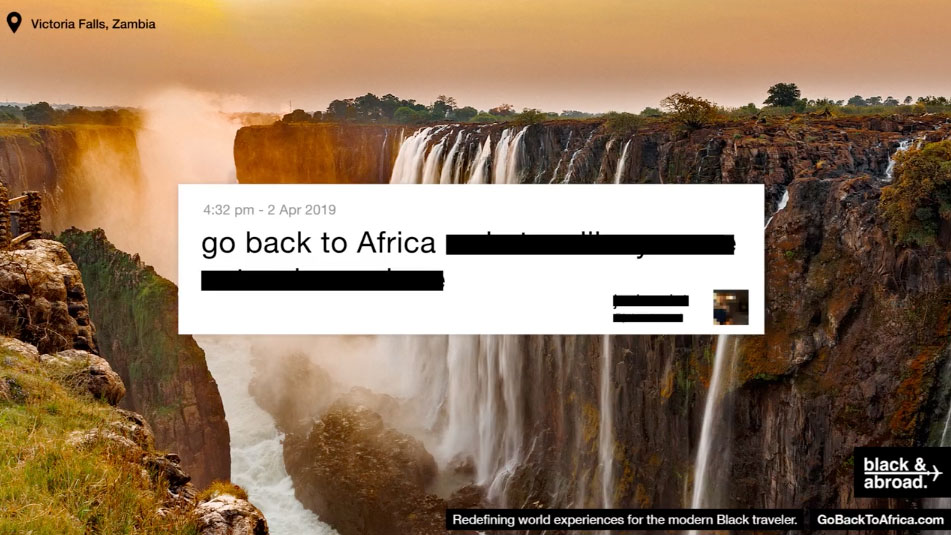 ‘Go back to Africa’ isn’t a phrase that a lot of companies would want to associate themselves with, but travel company Black & Abroad decided it was time to reclaim the term. The founders Eric Martin and Kent Johnson are using the phrase to spearhead a campaign that encourages black travellers to explore the African continent.

Black & Abroad defines itself as “a brand dedicated to redefining experiences for the modern black traveller”, and wanted to “end the hate” that the phrase ‘Go back to Africa’ is usually associated with. It’s worth noting that when doing research, Martin and Johnson discovered that this phrase was used 4,500 times a month online – often in a negative way.

Black & Abroad worked with Canadian agency FCB/SIX on the campaign – watch the full case study above – and there are several clever aspects to it. It takes hateful tweets in real-time and erases the racist context to leave just the phrase ‘go back to Africa’, displayed over a positive image of Africa (see our post on improving your photography skills if you’d like to emulate the images). These images then become targeted ads for different African countries.

The campaign also identified that for black people to want to visit Africa, they need to be able to see themselves there. This was problematic in that most people in mainstream travel imagery are white. To combat this, it developed an algorithm that pulls in images of black travellers from across social media, and puts them onto its website: gobacktoafrica.com.

With its hyper-targeted ads and clever use of algorithms, this is already a smart campaign, even without the social message. And a quick Twitter search for #GobacktoAfrica shows that as Black & Abroad aims, some of the hateful narrative around the phrase is already being displaced by talk about the campaign, and the beauty of Africa.