Is Apple about to bring back its rainbow logo?

Is Apple about to bring back its rainbow logo? 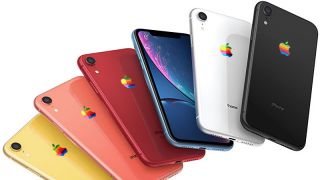 Apple’s rainbow logo might be about to make a comeback, if a report from MacRumors is to be believed. The multi-coloured design, which served as Apple’s logo from 1977, was replaced by a single colour version in 1999.

If Apple does decide to bring back its old logo, it wouldn’t be the first brand to rely on its heritage. Our guide to logo design takes a look at how ‘retro branding’ is a popular move for companies looking to reawaken affection in consumers.

And according to MacRumors, the rainbow logo could be making a reappearance as early as this year. In its report, the site claims that a “well-connected MacRumors tipster” with a reliable track record sniffed out the possible design development.

The site speculates which devices could be decked out in the rainbow logo, with the Mac leading the way, seeing as the original Macintosh sported the design. New lines of iPhones and iPads have also been cited as potential contenders. MacRumors even went and mocked up how the classic design would look on sleek new devices (see the images above and below).

Would a return to the six-colour logo, which made its debut on the Apple II computer, be the right move for Apple though?

After all, the company has always prided itself on doing things differently. The designer behind the rainbow logo, Rob Janoff, even explained in our interview that the colours were originally dropped so that Apple could keep ahead of the competition. Would a step back for the logo be a step back for the business?

It would be tempting to think that this decision is part of the fallout from Jony Ive’s decision to step down as Apple’s chief design officer. However Apple has been embracing the essence of the design over the years, including a redesign of the Apple Park that saw its stairs and walkways decorated in the rainbow palette.

Of course, this could all come to nothing. You know what rumours are like. In the meantime, if you’re looking to create your own Apple artwork, check out our buying guide to the best Apple Pencil deals available right now.