We’ve all heard about the ‘Insta-rich’, those influencers who’ve become huge based on their Instagram presence alone, and now travel the world posting pretty pictures in order to get paid by sponsors who are willing to shell out to gain exposure to their large, established audiences.

Whether you like it or not, ‘influencer’ is an actual job title in 2019, and it can be a lucrative, and beneficial, business – but how much, exactly, are these people really getting paid?

This new report from the team at Hopper sought to find out – in order to provide more context in the growing influencer marketing space, Hopper conducted research on exactly what it would cost to get a sponsored post on the feeds of a range of well-known Insta users.

And the results are, in some cases, a little staggering: 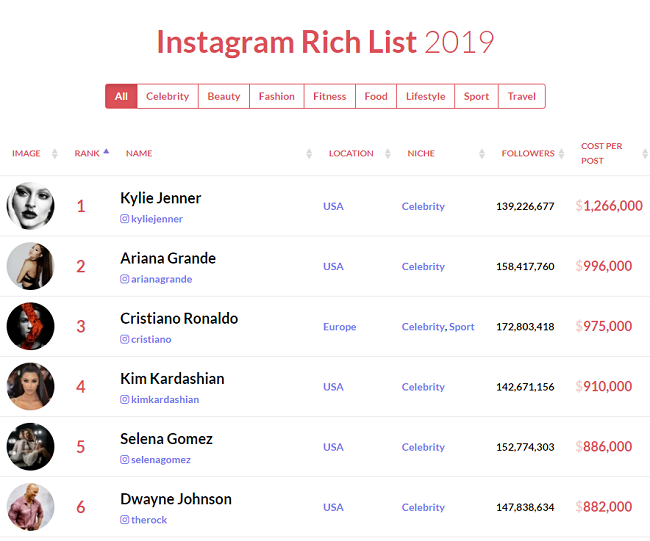 As you can see, the biggest of big names on Instagram are, in fact, charging around a million dollars per post. That’s one single image, one single update, in which Kylie Jenner holds your product. And depending on the product, it may well be worth it – the exposure that Jenner can bring your brand could result in a huge boost in sales.

It may seem like an unjustifiable cost, but each brand will have its own metrics – and these users can only charge so much because someone is willing to pay it.

In order to determine what each of these influencers is charging, Hopper first established a list of likely influencers in a range of categories, based on their account “size, engagement and impact”. The Hopper team then sought to contact each of the listed influencers and get more information about what they charge per post:

“All accounts were contacted requesting price per sponsored post. Each account was contacted either directly or through an agent or manager.”

Hopper also cross-checked its data via publicly available information, in order to establish what, exactly, each of these users charges per post – so the above information is not speculative based on an average account or engagement ratio, this is actually what these people charge for sponsored content.

Of course, each user would also have their own qualifiers for any sponsored content request, and it would be up to their discretion on whether they accept an offer from a brand or not. But if you were looking to buy a mention from these big names, it would certainly cost you.

And it’s not just confined to established stars. 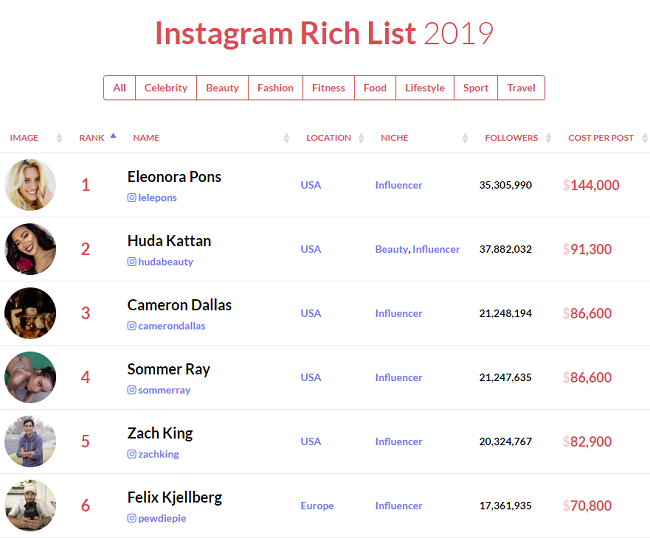 As you can see here, Hopper’s report is separated into a range of categories (listed at the top of the screen). In the ‘Lifestyle’ category, you can see some of the biggest web celebrities, including Le Le Pons and PewDiePie – and while they’re not charging a million per post, the costs are still significant.

The drop-off is fairly steep from the top influencers to the bottom in the top ten of each section, but it’s definitely clear that these people are making big dollars from their Instagram followings, that being an ‘influencer’ is a lucrative full-time career for some.

And again, that makes sense – for many brands, tapping into these users and reaching their followings will be worth the cost. Micro-influencers have become more of a focus of late, people with smaller, dedicated followings who don’t cost as much per post, and who can help drive sales results. But the big names, as always, will remain in high demand.