If you want to maximize your performance on any digital platform, you need to create your content in line with its search system, which will ensure that your posts show up when people go looking for the products and/or services you offer.

Pinterest is no exception. Back in 2016, Pinterest reported that it was facilitating more than two billion searches every month. At that time, Pinterest only had around 100 million users, and while Pinterest hasn’t provided any official update on this stat, we can assume, as the platform now closes in on 300 million active users, that it’s significantly increased on that.

And if you want to maximize your Pin performance, you need to ensure your Pins are being found in relation to your key terms.

We’ve previously published an overview of how Pinterest’s search system works, but this week, Pinterest has provided a technical rundown of how it utilizes the text elements of Pins in order to provide more relevant user experiences. 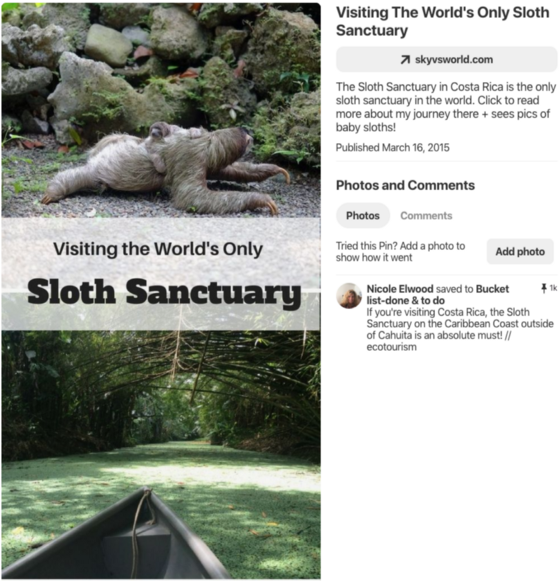 The important note here is that some of these keywords are not actually listed in the Pin – ‘Carribean’ isn’t mentioned directly in the user-provided caption (though it is in the share comment), neither is ‘animal’ or ‘travel’. These terms are generated based on the likelihood of them being relevant search matches for the extracted terms – so ‘visiting’ might have a correlation with ‘travel’, ‘sloths’ with ‘animals’, etc.

Given this, it’s important to ensure that your Pin descriptions are accurate, and align with keywords and terms specific to the Pin image. Pinterest’s system is advanced enough to make relevant connections, but it needs the key terms to accurately display the Pin.

Pinterest sources its text information from several sources within each Pin:

You can’t control the visual recognition element, which Pinterest uses to match products via its Lens-based tools, but the others are all reliant on your input when posting.

Based on the text it finds in each Pin, Pinterest’s system then extracts the most likely data points for matching, and removes those which are not relevant.

For example, using the description from the Pin above:

“The Sloth Sanctuary in Costa Rica is the only sloth sanctuary in the world. Click to read more about my journey there sees pics of baby sloths!”

From that description, Pinterest would remove annotations such as “world”, “journey” and “read” which are not relevant to the Pin, and don’t make good keywords. That doesn’t mean you shouldn’t use such descriptors, but it’s a reminder of the importance of using relevant, unique keywords which help to classify your content.

You can read more of the details in this Pinterest Engineering post, which may help provide you with a clearer understanding of exactly how Pinterest classifies and surfaces matches, and what that means for your strategy.