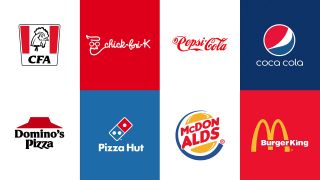 What would happen if rival brands decided to collaborate and combine their logos? That’s what kitchen appliance dealer CDA has done, with a series of delicious logo mashups that have resulted in some impressive pieces of experimental design.

Slamming together two or more separate creative works is rarely the best idea, but when carried off with sensitivity and panache it can produce stunning results, and for one of the greatest examples of this you should definitely pay a visit to The Kleptones and avail yourself of some of their musical creations, all carefully constructed from other songs.

Musical mashups often work thanks to the surprise element of mixing unlikely genres of music together, but these visual mashups from CDA work in a different way. Here they’ve taken similar fast food brands and juggled their logos, with varying degrees of success. (See our logo design guide for advice on how to craft successful branding.)

CDA points out that fast food logos are often cultural icons that we immediately recognise. But, it asks, how deeply into our subconscious are these logos ingrained, and would we still recognise them if they weren’t quite the same?

As these mashed-up logos demonstrate, the answer is, well, sometimes; it depends on just how familiar we are with the brands in question and how closely we associate them with their logo design.

So for example, when it comes to swapping round McDonald’s and Burger King, nobody’s going to fall for that one; they’re simply too well-known for anyone to accept the mashed-up versions. Although interestingly, the Pepsi Cola brand name in the Coca-Cola style actually works, more so if you’re aware that its early logos were drawn in a very similar script style.

The most interesting experiments are the ones with brands that you don’t pay that much attention to. We’d totally fall for the Dunkin Donuts/Krispy Kreme mashup, and the Baskin Robbins/Dairy Queen logo swap would sail by us unnoticed.

The Starbucks/Tim Hortons mashup is a fun one; we particularly like how the Starbucks mermaid logo has been changed to reflect Tim Hortons’ hockey-playing history. As for the less successful efforts, we’re strangely horrified by the collision of Cadbury’s and Hershey; either logo would put us right off sampling whatever chocolate product it was promoting. And as for KFC vs Chick-Fil-A, well, we can see what they were trying to do, and they probably shouldn’t have bothered.

Scroll through these logos by using the arrows below.