Data privacy has become a key area of concern in recent years, highlighted by the Cambridge Analytica scandal, which showed how your personal Facebook information can be – and has been – used against you.

And while the full impacts of such data access and usage are unclear, what is clear is that these insights can be extremely powerful, and that what’s shared on social media platforms in particular can be used in a range of ways.

Amid this renewed focus on data security, online platforms have been increasing their reporting on Government requests for data, and how they action such. For example, all of the major platforms now publish regular transparency reports, which provide a specific overview into data requests and disclosures, and how they approve or deny such.

Those reports tend to be fairly information heavy, so the team from Addictive Tips have put together a new report which compiles all of the various transparency disclosures into one, showing which platforms are seeing more requests, where those requests are coming from, and how many are approved.

Here’s an overview of the data.

First off, on locations – the full report includes an in-depth analysis of where each of the major platforms are sending user information as a result of data requests, but here’s a look at the charts for Facebook: 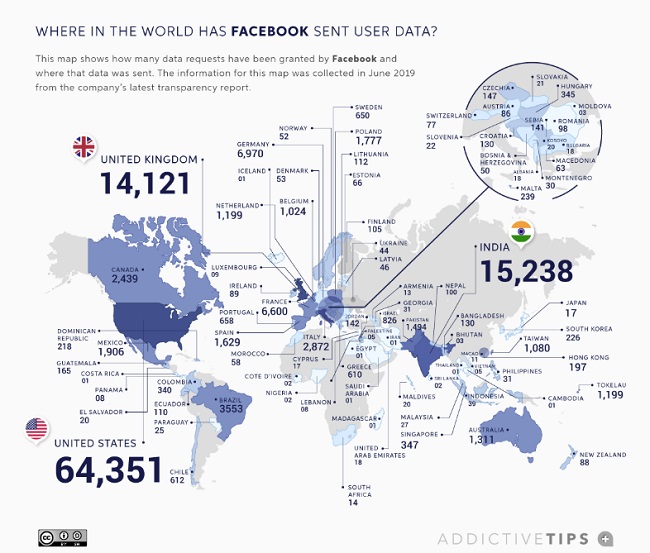 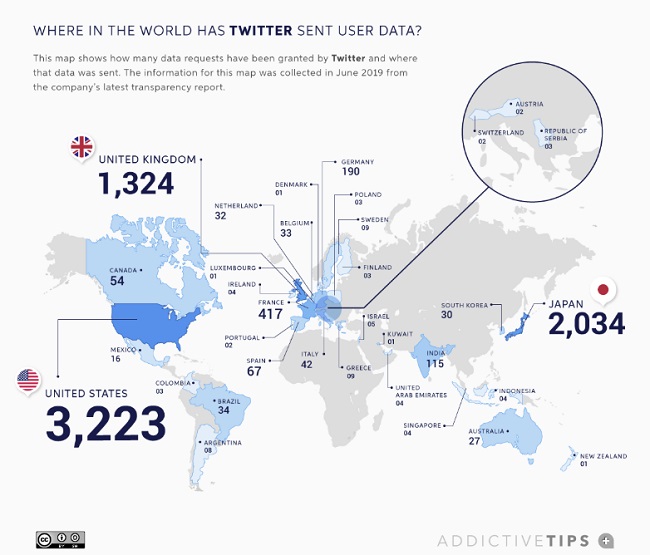 Unsurprisingly, the US is where the majority of data requests are coming from for these platforms, while India and Japan are also major usage areas for Facebook and Twitter respectively. The amount of requests coming through are likely somewhat indicative of the influence each platform holds in each region.

The report also looks at information requests overall, and which platforms are seeing the most attention in this respect. 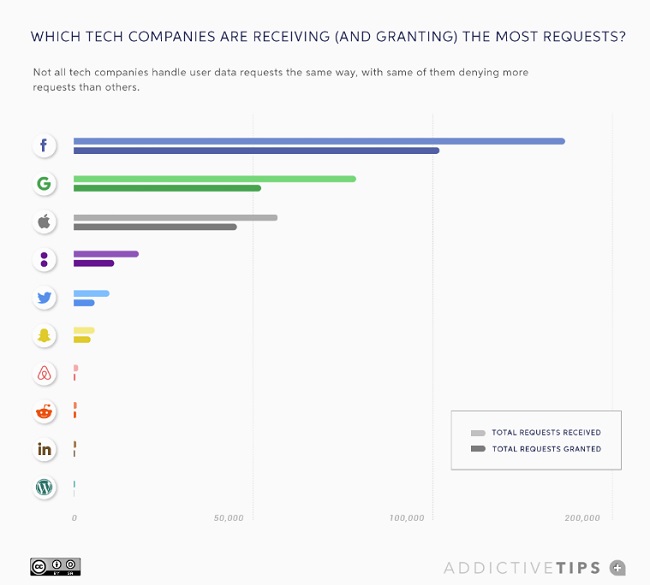 Again, not overly surprising given Facebook’s dominance, and the attention on the company in the wake of the CA scandal.

But worth noting – while it may see the most, Facebook doesn’t grant the most requests. 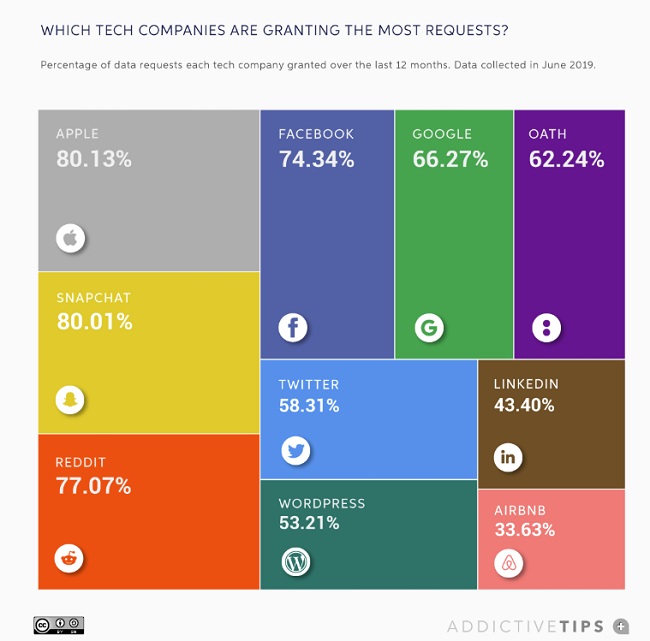 So Facebook may be getting the most attention, but still rejects a lot of them. Interesting too that Snapchat grants 80% of information requests sent its way.

Overall, the US leads the way in information requests, with Germany some distance behind in second. 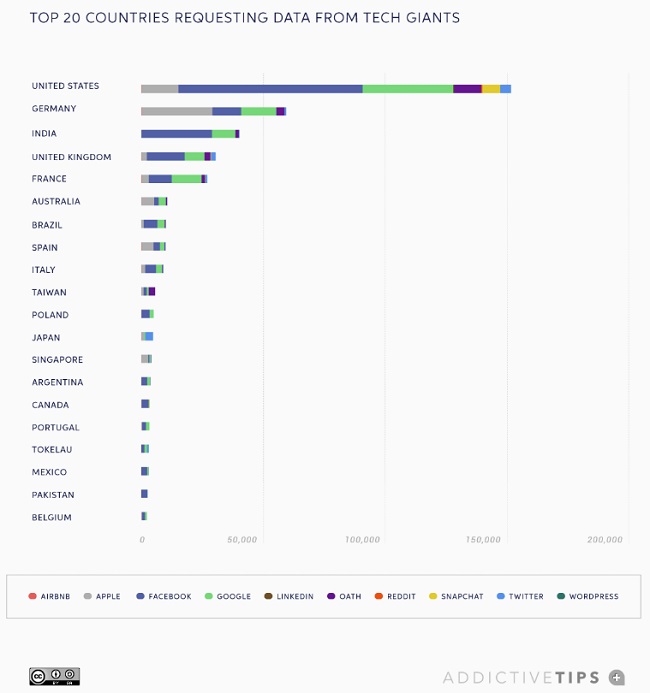 Also interesting – information requests actually dipped in 2018, after reaching a peak in 2017. 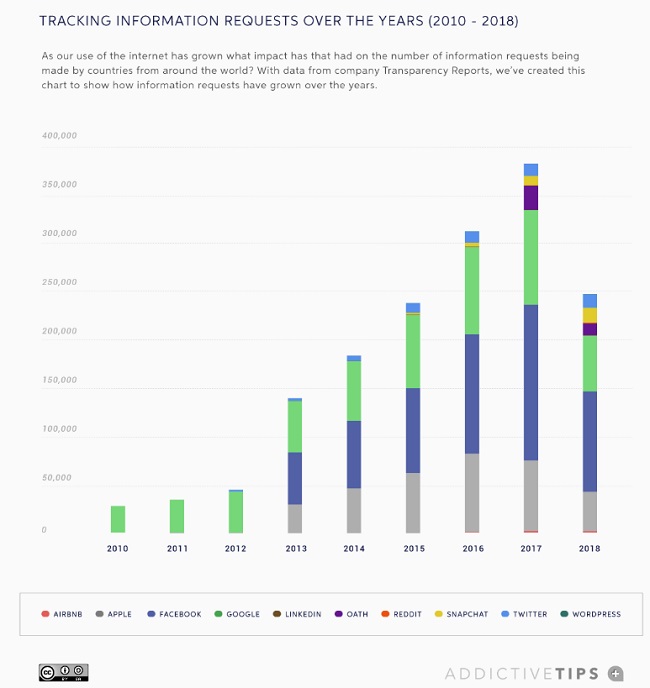 2017 would have been the height of the Cambridge Analytica blowback, so it makes sense that there would have been more scrutiny then. But you would also expect that to have held more than it appears to have done.

Does that mean officials have not been getting the insight they hoped from such disclosures? Obviously, it’s impossible to say, but it is surprising to see that requests have decreased overall.

It’s an interesting overview of the current state of social media privacy, and the emphasis on digital channels for information tracking and insight. It’ll be particularly interesting to see if information requests rise again in future – and if they don’t, to examine why that is, and if/how officials are getting such information without the same.

You can read the full report, including more specific insights on each platform’s information requests, here.