Video marketing is an undeniably powerful opportunity to reach your target audience — in fact, more than 50% of consumers prefer video content over other forms of content, including email, social, and blog posts.

Additionally, in the last few years we’ve seen a rise of live video as an effective marketing channel. And for good reason — live video is watched 8.1 times longer than video-on-demand.

Over the past year, my team at HubSpot tested Facebook Live vs. YouTube to figure out whether live video was really worth the hype. Here, we’ll explain which one worked better for us.

Like many other marketing teams across the globe, my team at HubSpot were no strangers to the live video trend. Back in April 2017, we launched #MartesEnVivo, a weekly Facebook Live educational video series in which we discussed marketing tactics and strategies for our Spanish-speaking audience.

Our goal was simple — to fight against the decreasing reach in our page. And, ultimately, it worked.

For over a year, we went live every Tuesday on Facebook for our #MartesEnVivo series, and the videos received double the reach of any of our other posts.

However, despite the high reach, we started to notice that the videos were generating neither real engagement, nor a loyal viewership base. The broadcasts were showing up in people’s news feeds, but few were sticking around to watch the whole video.

For instance, take a look at the audience retention analytics of a Facebook Live video (#MartesEnVivo): 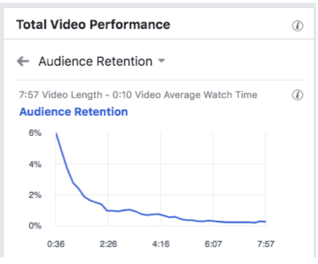 As you can see, while we’d receive an initial jump in traffic, our traffic was quick to decline over the length of the video — in fact, we lost most of our audience around the two minute mark.

As a result, we decided to test out something else — pre-recorded videos on YouTube.

At the beginning of 2019 we decided to switch from Facebook Live to YouTube and re-branded our series to #UnMejorMarketing to better align our videos with the HubSpot brand, and publish higher-quality content.

Looking back, this was a huge gamble for us. Ultimately, we were doing what every industry expert would advise against — we were terminating production on a live video series that was acquiring a ton of traffic for our Spanish-speaking Facebook page, without any proof that pre-recorded video would do better than live.

However, we found it was the right decision for us.

Some of our recorded videos began performing better than our live video, while being significantly easier for my team to produce. Ultimately, content still wins over format.

We improved the average watch time from nine seconds to over two minutes, and the percent of people watching at least half our videos jumped from 1.87% to over 60%.

For instance, here’s a typical performance of one of our YouTube videos (#UnMejorMarketing):

Additionally, the series is growing our Spanish-speaking YouTube audience, with a high number of new subscribers generated directly from these new videos.

Ultimately, our experiments with live video vs. YouTube taught my team the importance of questioning marketing trends.

Facebook is still an effective marketing channel, and live video is undeniably a powerful format, but that doesn’t necessarily mean it’s right for your brand.

Your brand is unique, and so is the content that resonates with your audience. To figure out the most effective opportunities for increasing ROI, then, it’s critical you evaluate different channels and formats until you find the perfect match for your content strategy.

In HubSpot’s case, we found that live video works best for content that clearly benefits from being live, like coverage of a live event. However, when we’re producing educational evergreen content, it’s better to rely on pre-recorded videos.

Likewise, Facebook tends to work best for content that’s both easy to view and share. A one-minute video showcasing an innovative tool is a fantastic topic for Facebook, but a 30-minute video demonstrating all the tool’s features will likely perform better on YouTube.

As for #UnMejorMarketing, the best news is that this is only the beginning. 82% of all internet traffic is expected to be video by 2021, so my team is confident in our efforts to continue creating high-value video content for our audience — it just might not be live.