Ad blocking and similar measures have become a significant issue for online publishers, and have seen a bigger jump in usage more recently in the wake of the Cambridge Analytica scandal and other data privacy concerns.

Google is one of the companies that stands to lose out the most from this. As more people block ads, Google loses more money, and as such, the search giant has been looking to implement solutions which cater to user privacy demands, while also enabling ad delivery to continue.

Google has previously rolled out its own variation of an ad blocker for Chome, while it’s also sought to penalize pages which provide poor ad experiences. Those have helped improve some key areas, but Google still needs to do more. Which is why, this week, Google has outlined the next steps its looking to take to improve online ad transparency, including measures to block digital ‘fingerprinting’, a more obscure tracking technique, and a new proposal for improved data transparency measures across the industry.

First, in terms of fingerprinting – which utilizes device data to establish a unique identifier for each user, regardless of any privacy settings – Google says that this practice may help publishers and websites, by providing an alternative data funnel, but it doesn’t address key user concerns on data privacy.

As explained by Google:

“With fingerprinting, developers have found ways to use tiny bits of information that vary between users, such as what device they have or what fonts they have installed, in order to generate a unique identifier which can then be used to match a user across websites. Unlike cookies, users cannot clear their fingerprint, and therefore cannot control how their information is collected. We think this subverts user choice and is wrong.”

As a result, Google says that it is now advancing its efforts to restrict the use of fingerprinting, blocking processes within Chrome and its other applications in order to disincentivize the process.

Google’s proposal to the broader industry, meanwhile, which it has published for discussion, outlines the measures which Google believes are key to solidifying the future of online advertising, including improved data usage transparency and controls.

“For many people, the digital advertising ecosystem is complex and opaque. They don’t feel that they have enough visibility into, and control over, how their data is being used for ads, including what data is collected, who is collecting it, and with whom it’s being shared. That’s why we want to work with others in the industry to explore measures that will give people the privacy that they expect.”

Google says that, based on the feedback it has gathered, these improved measures need to focus on three key areas:

​Google’s proposal document outlines each of these elements in detail, and how it proposes to address them. 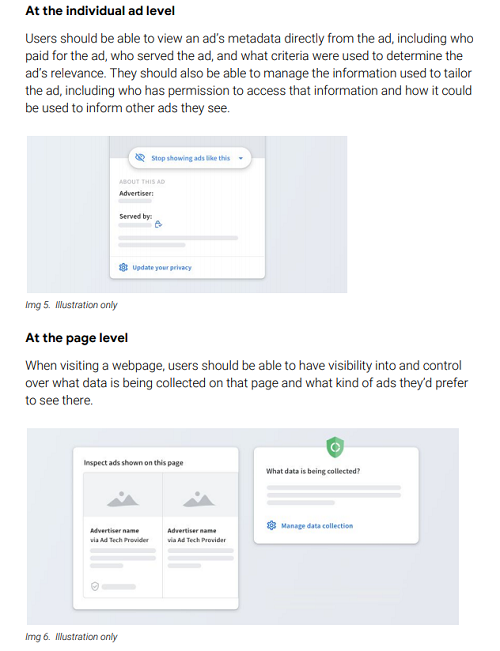 Much of the discussion here makes for fairly stale reading, but it’s important to note the changes being proposed, and how Google is looking to address the key concerns around digital advertising privacy, in order to provide increased user control over data use.

As noted, in the wake of the Cambridge Analytica scandal, data usage, and transparency around such, has become a key area of focus – now we know that such insights can and are being used against us in varying capacity, which has subsequently prompted more consumers to look for alternate ad blocking solutions to limit the same.

There are already calls for wider regulation in the tech sector, from various governments, and if Google and other digital providers can get ahead of that, and show that they are working to facilitate improvements, they may be able to stave off any further interference.

Google’s proposal moves towards this, an important area of examination for the sector moving forward.