Snap Inc. has announced a new update for its Lens Studio AR creation platform, which aims to make it easier for novice creators to build their own Snapchat AR experiences, while also providing new tools for advanced creators to expand their Lens functionality.

First up, Snap has added a new interactive tour element to guide new users through each step of the process to create a Lens within the platform.

As you can see above, new prompts have been added to lead users through each element. By following the steps as outlined, anyone can create their own Snap Lens, based on the available templates. 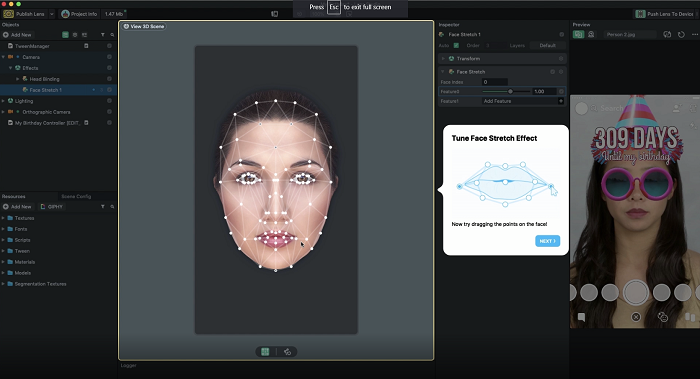 The process will help Snap recruit more creators, expanding its pool of available visual tools. Snapchat has previously noted that, within the first year of enabling users to build their own AR effects, more than 250,000 individual Lenses were submitted, which were collectively viewed more than 15 billion times. Instagram recently launched its own variation of Lens Studio (Spark AR) to tap into that same creative capacity, so it makes sense for Snap to expand its capacity even further on this front in order to stay ahead.

In addition to simplifying the Lens creation process, Snap has also added 6 new AR templates and 14 new Landmarker locations for AR creators to experiment with.

You can see the new template options in the top image – the new tools which users can now build their Lenses with are:

The middle image here is an example of one of the new Landmarkers – the last key element of the update is that Snap has added a range of new locations which Snapchatters can also build AR experiences around.

The new locations are:

Worth noting that two of these new locations are in India, a region where Snap had not been able to gain much traction till its recent Android update.

The new options provide more capacity for Snapchat users to build their own experiences, and further connect themselves with the app, and their on-platform communities. That, as noted, is now even more important, given that Instagram has begun providing similar capacity.

This is a key area where Snap has long held a lead, in facilitating more engagement and fostering community connection. But Instagram has a lot more users, and provides a lot more capacity for creators to showcase their work.

Determining which aspect is more important will be a key element in the battle to maintain creator attention.