With Twitter working to improve its data and security measures, this is probably not a great endorsement of its evolving tools.

On Friday afternoon, at around 1pm, Twitter CEO Jack Dorsey started tweeting out some unusual updates. 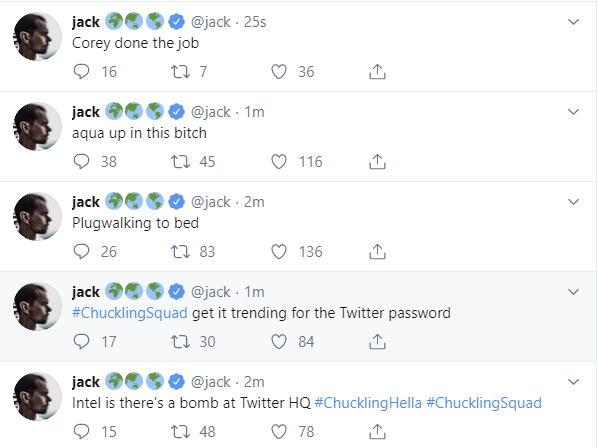 The tweets then escalated into a stream of offensive, racist updates, which we have chosen not to share.

After around 20 or so tweets, Twitter’s communications team shared this update:

We’re aware that @jack was compromised and investigating what happened.

As you can see in the screenshot above, the hack was seemingly carried out by a group calling themselves ‘Chuckling Squad’, which has also claimed responsibility for a range of recent hacks of online celebrity accounts, including YouTubers James Charles, Shane Dawson, Amanda Cerny and King Bach.

It’s not clear exactly how the group has been able to gain access, but one report suggested that the hacks are carried out by the hackers calling AT&T and asking for a SIM card switch.

The incident is particularly concerning for Twitter, given that a) As noted, it’s been highlighting its efforts to improve its security measures of late, and b) Jack Dorsey has repeatedly noted that he does all of his work on his mobile device, a potential security vulnerability. And while the aforementioned celebrity hacks are all significant, you can only imagine that the info in Jack Dorsey’s DMs is more valuable. Many people, you would assume, would now be sweating the details they’ve sent through to him.

Of course, it’s not necessarily Twitter’s fault, it may not be a flaw in Twitter’s systems at all, but the fact that its CEO is susceptible to such doesn’t exactly inspire confidence in its processes.

It seems unlucky more than anything, but the outside perception is not a great look for the platform.