BIG changes could be afoot for the Apple logo

BIG changes could be afoot for the Apple logo 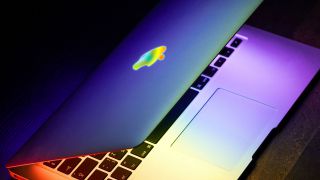 A new patent filing from Apple suggests that it’s working on ways to make the logo on your device change colour and even surface texture. And while there’s no way this is going to take effect in time for this year’s Apple Black Friday deals – or even next year or the year after that – it could eventually change the way we look at Apple devices.

While Apple’s never likely to mess with the iconic shape of Rob Janoff’s 1977 logo design, it’s made plenty of adjustments to its colour and texture over the years, from the original rainbow design, through shiny glass and metal iterations, through to the flat version used today.

Apple’s also happy to roll out temporary imaginative takes on its logo for its various events and conferences, as most recently seen at the iPhone launch event with its multicoloured and multi-layered translucent logo.

The new patent filing, however, suggests that it has even bigger plans for the logo, and that in future devices it could change its appearance in response to various events. So it might blink when you have a new message, or change to a pulsing red tone to warn you that your iPhone or MacBook needs charging, or even switch to a simple mirrored surface when nothing’s going on.

The application goes on to state that the logo could be adjusted for aesthetic reasons, suggesting that you could set up your device to have the logo in any colour you like, or to flash to alert you of the some hot Black Friday MacBook deals.

Patent applications make for terribly dry reading as they’re made for patent lawyers to understand, not mere mortals like us, but the basics of it are this: Apple’s talking about adding an ‘adjustable decoration’ to devices, which would include adjustable opacity, tint, haze and mirror layers that could be affect by user input, sensor input (including light, temperature, sound and geographic location) or events such as incoming calls.

That suggests plenty of ways to alter the appearance of the logo. We’re not talking about a simple LED lighting effect here; the adjustable mirror effect alone seems worth the price of entry, and there seems to be a lot of potential for all manner of visual effects that you’d associate more with print design than visual displays.

How Apple’s going to do all this – or indeed when, or even if – is another matter. Deep in the patent application it discusses the technologies that could be used, such as nanoparticles for the tint layer and a cholesteric liquid crystal device (your guess is as good as ours) for the mirror layer, but it doesn’t go into great detail. After all, it’s not about to give away any technical secrets if it doesn’t have to.

Apple files a lot of patent applications, and this one could come to nothing, so don’t get too excited about it right now. But we’re keen to see if Apple can carry this one off; watch this space.