The best smartphone in 2019: be more creative on the move

The best smartphone in 2019: be more creative on the move 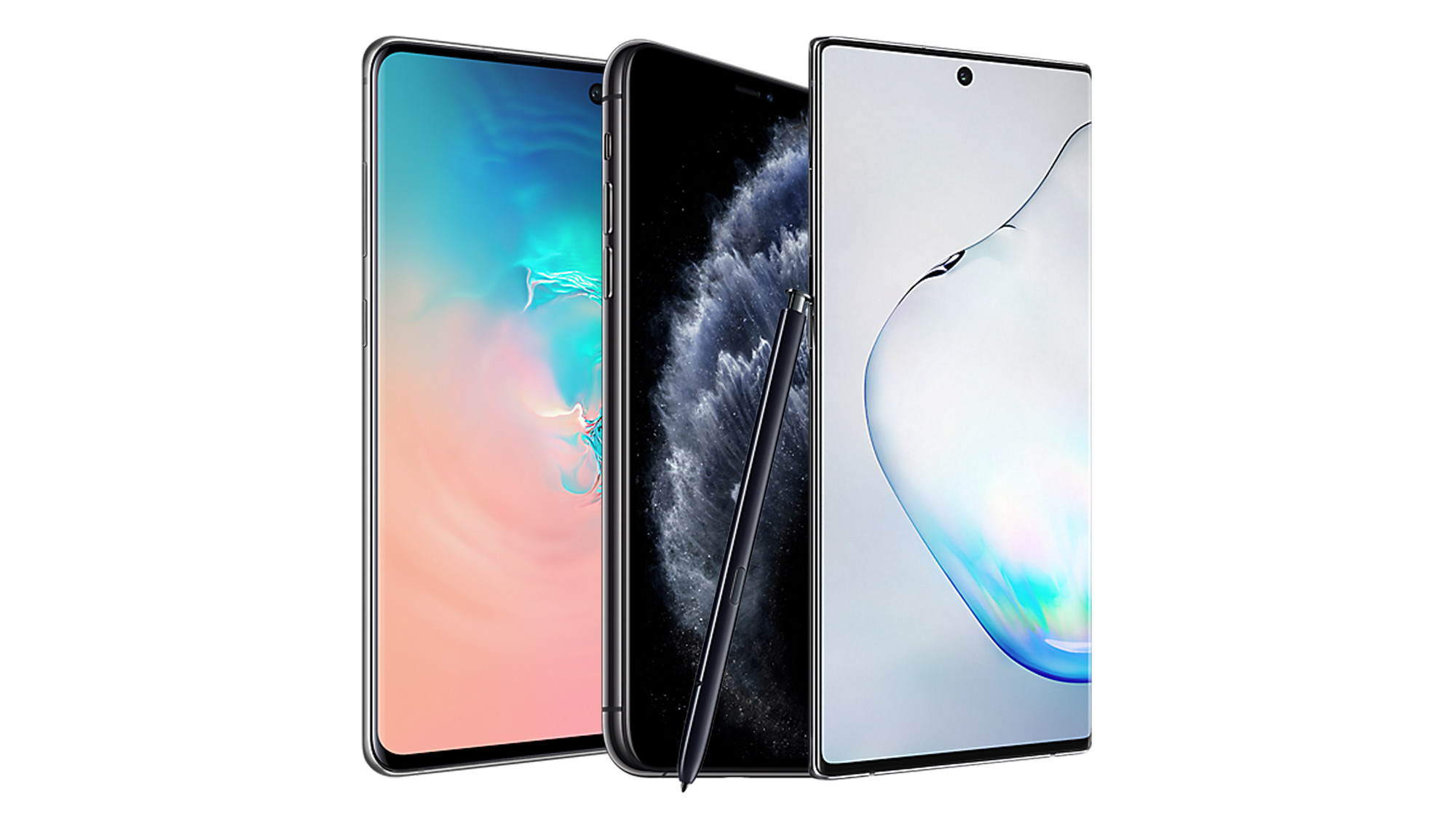 With such a wide variety of choices, finding the best smartphone in 2019 can be a challenge. Do you want the latest and greatest from Apple? Or maybe Samsung’s innovative screen technology to make your pictures and videos pop. Whatever you’re looking for, there is a lot of choice and we’ve listed the best options below.

Every manufacturer seems to sneakily include some software or tools in their phones that can make your life as a creative that much easier. Whether that be the ability to film in 4K, accessories to make drawing easier or even just super powerful processors.

However, when it comes to the best smartphones, which one can really enhance your creative performance while also making a great daily phone? If you’ve got the money to burn, our votes right now go to the Samsung Galaxy Note 10 or for Apple fans, the iPhone 11 Pro Max.

With the Note 10’s innovative pen for use in drawing, writing and editing and the iPhone 11 Pro Max’s incredible video camera, these two devices are easily the world’s best phones for creatives (pair them with the best iPhone apps and Android apps for creatives and you’re laughing.)

However, we’re fully aware that neither of those phones come cheap which is why our guide to the best smartphones of 2019 includes a range of devices from the best (and most expensive) to some cheap and cheerful options too.

In this guide, we’ll walk through the top contenders in all shapes and sizes, from a variety of manufacturers and budgets, and including Android and iOS options, to help you decide which mobile phone to buy.

Of course, screen quality and processing power are considerations you need to make. But we’ll also tell you the best camera phone to grab if fantastic photography is a greater consideration for you (spoiler alert; It is the Google Pixel 3 you’ll want to go for), or if you’re buying on a shoestring. Keep reading to discover the best mobile phones right now.

The world’s best smartphones in 2019

Let your creative abilities run free with the Note 10

If you’re a creative and your phone is an extension of that, the Samsung Galaxy Note 10 will be the ideal phone for you. It saves you some money over the extremely costly Note 10 Plus while delivering on specs.

You’re getting a massive 3,500mAh battery to power you all the way through the day, a triple camera set-up, featuring an ultra-wide lens, a regular lens and a telescopic one – perfect for a range of different photo shoots.

This level of quality continues through to the video camera. With advanced image stabilization and ‘bokeh’ background blur, you can create high quality videos straight from your device.

While the collection of cameras is certainly an added bonus, the real power of this phone comes through the ‘S’ pen. Realistically, the Note series is the only range of phones to properly introduce a stylus.

With this pen you can take notes without even turning on your screen (perfect for pitches and meetings), make gestures to control apps and easily draw with the phone – an added feature to really make this the best smartphone of 2019.

Big on power and storage

Same as above – expensive

Can be tricky to handle

It wasn’t an easy choice between the Note 10 above and the Samsung Galaxy S10 Plus. And if photography’s your thing then 2019’s S10 Plus may even be the better choice. Just a cursory read of some of the specs on board this camera phone will give you an indication, starting with the 12MP cameras with adjustable f/1.5 aperture on the rear of the handset. Even in low light, the S10 Plus takes stunning snaps. It’s equally impressive for video (we have a bit of a soft spot for the super slow mo 960fps function) and photos from the front camera are also excellent. This one is highly recommended.

Go all out on Apple’s latest and greatest

For those that don’t mind spending a bit more on their phone and want the best Apple device around, the iPhone 11 Pro Max could be the best smartphone for you.

Everything about this phone feels like it was designed for the creative market. The cameras are more powerful than ever, offering up an ultra-wide camera and optical zoom.

From the demonstrations Apple showed when the phone was released, you can get some incredibly impressive shots from this device. Look past the camera and this phone has a massive 3969mAh battery, giving you well over a day of life at a time.

And, a feature really set to impress is the power. This phone has the fastest CPU currently on the market, making it perfect for gaming or editing on the go.

The last of the Plus models in the best smartphone in 2019 list (for now at least) is the iPhone 8 Plus. It is now one of Apple’s older devices but with that age comes an affordable price tag.

The screen remains largely the same as the 1080p iPhone 7 Plus, the camera on the 8 Plus is its real selling point. It’s a dual-camera affair, but unlike Huawei and Leica’s offerings, the iPhone 8 Plus camera is all about that 1x to 2x optical zoom. Build quality is better than anything out there (possibly excluding Samsung’s phones) and features such as 3D Touch and Touch ID with Apple Pay make it a real winner. And of course, the depth and breadth of iPhone apps for creatives is always a swaying point.

And if you want a budget iPhone without losing out on specs, the iPhone XR has recently taken a tumble in price.

The Galaxy Note 8 is still superb

Battery is a rare misstep

If you saw us banging on about how good the Note 10 is, above, but balked at the cost, then the Samsung Galaxy Note 8 is an easy sell. Since this device came out we’ve seen both the Note 9 and 10 come out, which means the Note 8 now rocks an incredibly affordable price tag.

It’s a big, bad brute of a phablet with fantastic cameras and the kind of processing power that wouldn’t look weak in a cheap laptop. Snazzy features to help you get the most from the impressive dual lens main camera include live focus for instant bokeh, and potent optical and digital zoom. It might be superseded, but on a features-price ratio, the Note 8 remains one of the best smartphones in the world.

Fantastic all-rounder with one major flaw

We love the camera

Huawei (pronounced hu-wah-wey, if you’re interested) has dramatically upped its game recently with its ‘P’ range of Android-powered smartphones – the Huawei P30 Pro being the best smartphone its ever produced.

Boasting a Full HD display, all-day battery life and an incredible camera set up (triple Leica with 40MP sensor and extra time-of-flight camera for more depth on portraits), the P30 Pro is really upping the competition for Apple and Samsung. And, to really show off its camera chops, the Huawei P30 Pro has a special weapon – its 50x zoom, allowing you to zoom further than any other phone.

Aside from its incredible camera, the phone’s broad 6.1-inch screen is a real boon for seeing finer details in your designs and illustrations, or comfortably utilising the keyboard and CMS.

There is one massive concern that stops us having the P30 Pro further up the page, however. Due to the USA’s security concerns, it’s not clear whether Google will continue to support OS and security updates or even access to the Play Store. So that’s a bit of ‘at your own risk’ attached to this one. Recent reports make it look like the Huawei P30 Pro will continue untouched but this is a situation that could easily change.

The best cheap smartphone for creatives

High powered for the price

A 6.3-inch smartphone for around the £200/$200-mark should ring alarm bells – it must be terribly slow to use, have awful cameras or at least be downright ugly, right? Wrong, actually, and the Honor Play is proof. Notionally intended for gamers, that massive Full HD display and HiSilicon Kirin 970 chipset mean that it comes close to matching some of the world’s best smartphones in those areas. The 16Mp dual lens main camera is well up to the job for Instagram-friendly shots (although low light photography does start to become a struggle), while its svelte dimensions and full-metal unibody cover mean the Honor Play has the look and feel of a flagship phone, too. All this makes it easily our top recommendation if you’re looking for a cheap smartphone.

The best smartphone for photos and video

What’s with the big bezel?

Will be too big for some tastes

With so many makes and models available, it can be hard to stand out from the mobile phone mob. The Google Pixel 3 XL tries, and succeeds, by concentrating on camera functionality without costing you a fortune. It’s hard not to be impressed by the photos you get with the f/1.8 aperture and 12.2MP sensor on the main camera, but give the 4K video capture and HDR feature a go and you’ll be gobsmacked by the quality. It also packs in true OIS and zero shutter lag, and of course there’s an array of compatible apps in the Play Store. Bear in mind that you’ll be stuck with a bulky bezel that most other phones have now eschewed. But compare the price to some other phones on this list, and you may just be tempted to pick the Pixel 3 XL.

A more affordable smartphone for video than the Google Pixel 3XL

Not the best design out there

SIM tray is difficult to use

Sony has a rich heritage in camera tech, and the Motion Eye technology in the Sony Xperia XZ Premium is a continuation of that. For one, it features super-slow motion video – recording at 960 frames per second. Yes, 960! Next, there’s predictive capture, which basically starts buffering your shot a second before the shutter is pressed – and then gives you four images to pick from. Its 19-megapixel sensor also has intelligent exposure controls to automatically adjust light levels (there’s also manual focus controls), while 5-axis stabilisation should make for steady 4K videos. The other big selling point of the 2017 XZ Premium (its elder statesmanship means it’s now a lot cheaper) is that it was the first smartphone to have a 4K HDR display, which means a delightful screen on which to play back your creations.