While Reddit has long been known as a more controversial corner of the web – where largely, anything goes – as the platform seeks to maximize its business opportunities, it’s been forced to clean up its act, and address concerns around its hosted discussions.

This week, Reddit has announced a new set of updates to its bullying and harassment policy, which are designed to better protect users, and address lingering issues. 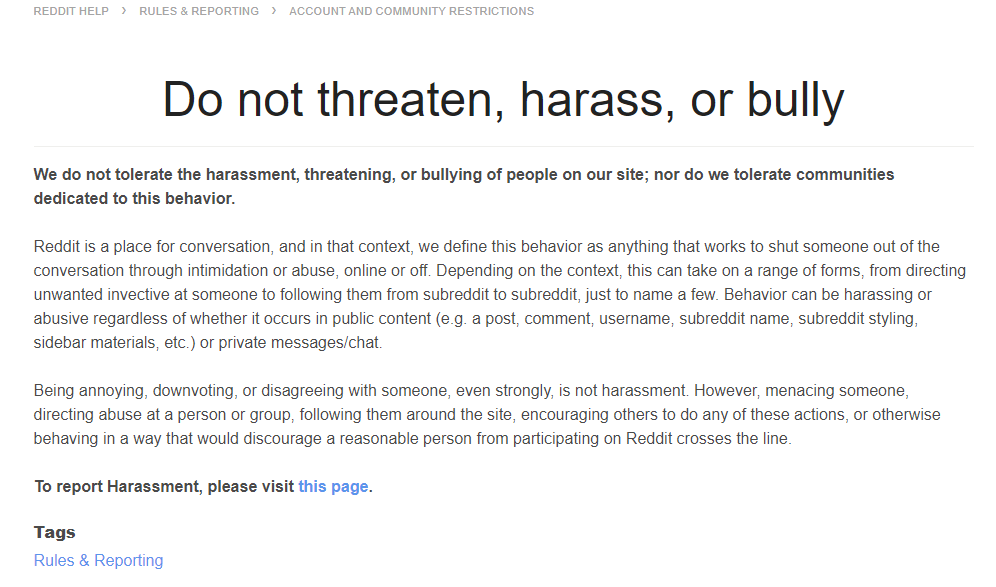 “These changes, which were many months in the making, were primarily driven by feedback we received from our users indicating to us that there was a problem with the narrowness of our previous policy. Specifically, the old policy required a behavior to be “continued” and/or “systematic” for us to be able to take action against it as harassment. It also set a high bar of users fearing for their real-world safety to qualify, which we think is an incorrect calibration.”

As noted, Reddit does have a history of controversial content and discussions, and some of those have, at times, veered into offensive, even criminal territory. In the past, Reddit has been forced to ban various discussions and groups around a range of topics, including child porn and alt-right groups, among others. Such discussion, combined with the anonymity of Reddit profiles, has, at times, lead to significant issues related to bullying and abuse. In fact, some Redditors even skirt the fringes of open abuse through subreddits like r/RoastMe, where people can call on the Reddit community to criticize them freely – and as harshly as they can.

Given the nature of such discussion, it’s difficult for Reddit to draw a line, but in recent times, that’s exactly what Reddit has done, as it’s worked to etch more clear parameters around what’s acceptable and what’s not, firstly aligned with better protecting users, but additionally, linked to the platform maximizing its advertising potential.

Reddit currently sees more than 330 million monthly active users, more than Twitter, Pinterest, LinkedIn and Snapchat. That’s gives it a lot of potential to attract marketing spend, but its limited ad options, combined with its reputation for controversial content, have been something of a barrier for it in luring more ad spend across.

But that is changing – just last week, Reddit outlined its updated video ad offerings, the latest in its evolving ad tools, while moves like this address the latter concern, and should make the platform more appealing.

Clearly, Reddit is looking to take a tougher stance on this front:

“Reddit is a place for conversation. Thus, behavior whose core effect is to shut people out of that conversation through intimidation or abuse has no place on our platform.”

It’s somewhat skeptical to link these updates with building the platform’s ad potential – as protecting users is obviously the key priority – but it is worth noting the change in attitude at Reddit, and what that may mean for ad opportunities moving forward.

The other question then is what will these changes mean for users – will Reddit’s community, which has long been free to say what it wants, look to alternate platforms as Reddit moves further away from its free speech roots?

The evidence thus far would suggest that this won’t happen, with Reddit’s user count continuing to rise despite tougher rules around what’s acceptable. But as Reddit seeks to appease advertiser concerns, it could become more of an issue. And that’s before you consider investors – some Redditors have already questioned whether the investment of $150 million from Chinese-owned company Tencent might lead to Reddit implementing bans on Chinese-related content.

It’s an interesting case study in matching corporate responsibility and free speech – and whether that’s even possible in the long term.