Mueller questions why SEOs do not publish addresses on their about page. The SEO community responded with numerous reasons, ranging from it’s a negative ranking effect to they don’t service Local SEO.

Why No Address in SEO Business Sites?

John Mueller said that he was browsing through different SEO sites and noticed that many SEO businesses did not list a physical address. So he turned to Twitter and asked the community why this was so prevalent.

“Why do so many SEO / digital marketing agencies not have their address at all on their websites? Not even on the “About us” or their policies/tos pages… ? Is having a postal address too old-school?” 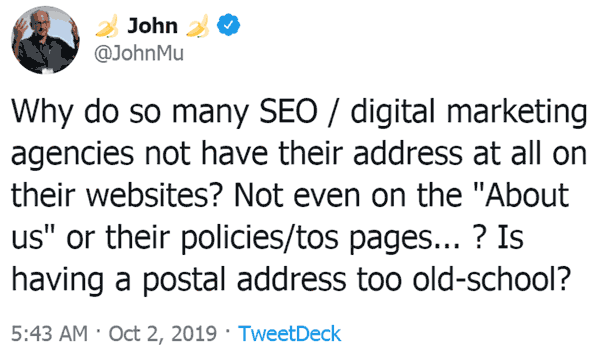 Bill Hartzer tweeted a good reason for not listing an address in an about page. He recounted that at one time he listed his address and also created a Google My Business page. He subsequently experienced a 38% drop in traffic.

Another member of the SEO community said that publishing an address and making that prominent might cause the perception that the address represents your service area. A limited service area might discourage clients that were outside of that location.

“And at the same time, you’re missing out on local clients, people in your own timezone … I don’t mind not having it on the homepage, but a rough location *somewhere* on the site seems reasonable?”

Local SEO and SEO Are Different

John’s response is reasonable but it overlooks the fact that local SEO clients require a different service from sites that are not local based.

The needs of a local based business that primarily sells locally are dramatically different from a business that sells online to a national or global audience.

Speaking for myself, although I do take some local SEO clients, my focus for the past 20  yeas has been on businesses with more complicated issues like figuring out how to rank better or recovering from an algorithm update. So, adding an address to appeal to potential local clients has never been a consideration.

Scott Clark tweeted that, living in Kentucky, he feared that geographic bias might cause unwanted stereotyping:

“We used to hide the fact we’re in KY because of stereotypes that persist even now. Once our avg client ARR passed $50M we stopped worrying. We need to make a living, John, and geo-bias is a real thing.”

John Mueller responded to the many comments by graciously thanking the SEO community for their feedback.

Mueller also tweeted that his question should not be interpreted as having to do with anything search or algorithm related:

“I just want to clarify: this is not related to any search change on our side. It’s purely me having browsed a bunch of legitimate SEO business sites and wondering where folks are based.”

Until Mueller brought this up, I confess to not having given the issue of an address much thought.

So today I updated my about page and added that I am originally from San Francisco but that I currently reside in Western Massachusetts.

How about you? Do you think it’s a good idea to list your address?