This is probably not great news for Facebook, which is in the midst of constructing its coming, dedicated news tab to improve news coverage.

According to new data from Pew Research, American news consumers have significant concerns about the impacts of social media on news coverage more broadly, with bias and sensationalism key among the noted issues.

First off, based on a survey of more than 5,000 consumers, Pew’s data shows that the majority of people believe that social media has had a negative impact on news content, and that the platforms themselves now have too much control over the flow of information. 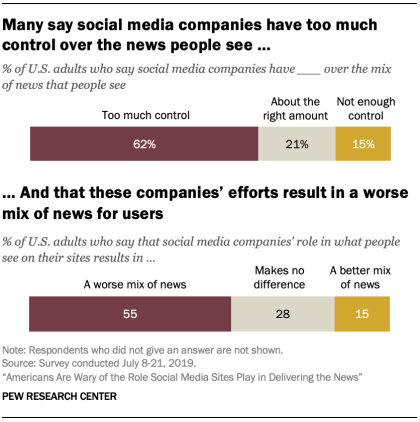 That’s particularly concerning when you also consider that more people are now getting their news content from social platforms, with Facebook being the leading provider. 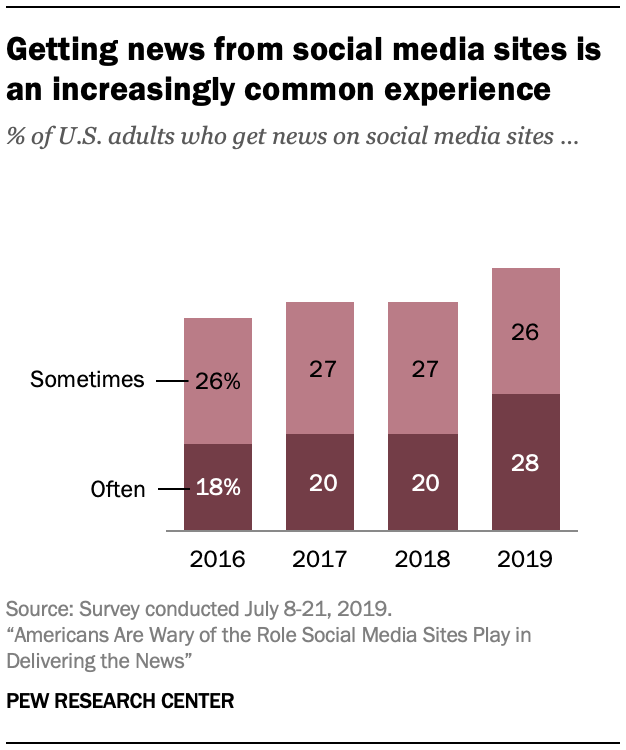 The most significant concern among social news consumers is bias, with the majority stating that they believe that news organizations, and their content, are treated differently by social platform algorithms. 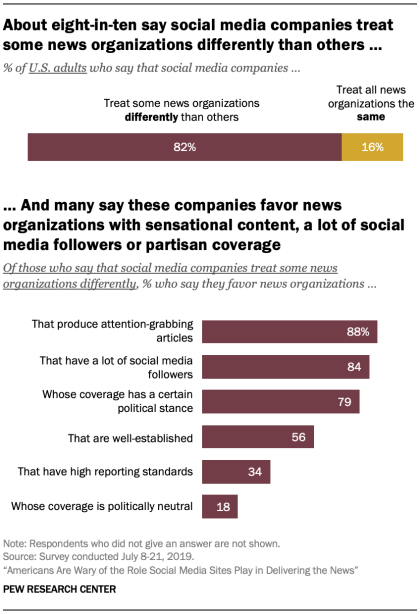 As you can see in the lower chart, a key concern is the rise of sensationalism – with social platform algorithms boosting reach based on engagement, it’s largely in publishers’ interests to post divisive, argumentative articles and headlines, as those will inevitably generate more discussion. More comments equals more reach, so even if the article isn’t one hundred percent accurate, if it hits a nerve, and sparks an emotional response, it’ll likely drive more traffic.

Equally concerning, however, is the suggestion that social platforms are boosting content which shares a particular political point of view, which, conversely, would also mean limiting the reach of other perspectives. Each user will have their own personal viewpoint on this, but again, that doesn’t bode well for Facebook, and it’s ambitions to create a ‘trusted’ news section.

This is further highlighted in another section of the report: 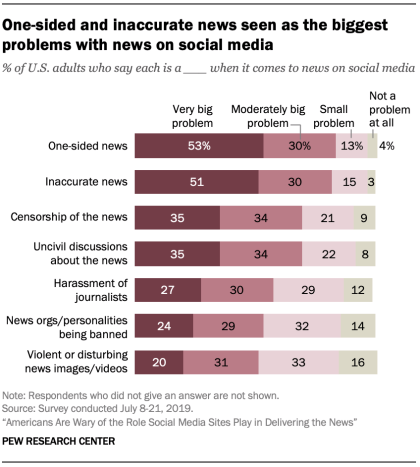 ‘One-sided news’ and ‘censorship’ are both in the top three concerns, while news organizations being banned also makes the list. Interestingly, inaccuracy is not the primary concern in this respect, though the majority do still see this as a problem with social media news coverage.

The results, overall, paint a pretty concerning picture of our current news media landscape. More people are now getting news coverage from social media, yet the majority see such as biased, sensationalized and untrustworthy for the most part. So what does that mean for our understanding of world events? If we don’t know who to trust, yet rely on these sources for news, how can the public establish a firm opinion on what needs to be done?

It’s any wonder we’re in a state of major political division.

Can social media itself be blamed for such divides? In some ways, you’d have to say it can – while partisan reporting has always existed, and all the major outlets have generally held some level of bias, conscious or not, now, in the age of algorithms, those biases have become a drawcard, an essential aspect of coverage. Now, it’s largely in a publication’s interests to signpost its stance on political issues, and to report on relevant happenings from that perspective. Because that’s what sparks debate and discussion, and online discussion means more reach, more traffic, and more ad dollars as a result.

Social media has exacerbated such, so in some ways, you definitely can attribute at least some level of the current division to these platforms.

Which is a problem – but it may not be a problem that can be fixed.

Facebook, to its credit, is looking to address these issues with its trusted news tab, but the noted skepticism around social media news coverage will make it a lot harder for The Social Network to enact such in any effective way.

So what do we do? One thing’s for sure, with the 2020 US Presidential Election coming up, social media is going to be put to the test as a news and discussion facilitator yet again. Will we come out of that seeing social as a potential negative force, as we did after the last election, or will its reputation be improved through enhanced security measures and balanced distribution and coverage?

It’ll be a major test, and it could have major implications for social media more broadly moving forward.