Twitter has once again sought to clarify its rules around tweets from high profile users which technically violate its rules, but which it chooses to leave active in the public interest.

Twitter published a similar clarification back in June, after repeated calls for it to take action against tweets from US President Donald Trump. Twitter has not taken action against Trump’s, or any other leaders’ tweets, but it has been thinking over how it can apply its rule exceptions in a more fair and balanced way.

“When it comes to the actions of world leaders on Twitter, we recognize that this is largely new ground and unprecedented. We understand the desire for our decisions to be “yes/no” binaries, but it’s not that simple. The actions we take and policies we develop will set precedent around online speech and we owe it to the people we serve to be deliberate and considered in what we do.”

So, Twitter’s still not 100% clear on what will and won’t violate its rules, but:

“If a Tweet from a world leader does violate the Twitter Rules, but there is also clear public interest value to keeping the Tweet on the service, we may place it behind a notice that provides context about the violation and allows people to click through should they wish to see the content.” 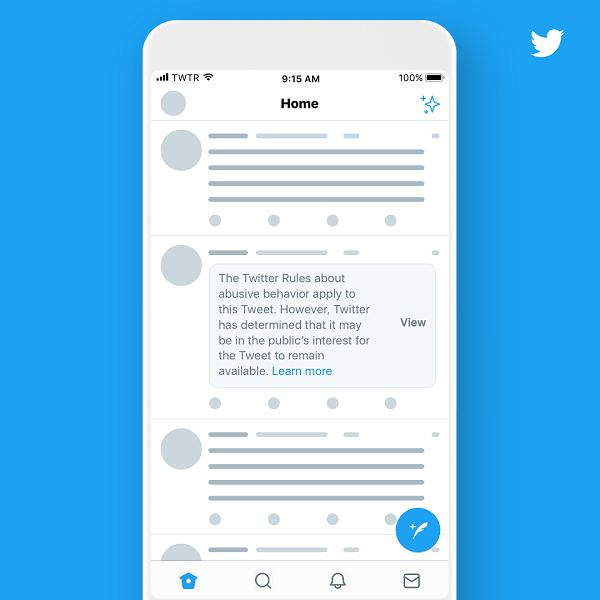 So what’s changed in the last three months? Well, seemingly not a lot.

Twitter’s clearly still feeling the pressure from users and outside organizations seeking action against violating tweets, but as Twitter notes, it invoked the public-interest exception “less than five times in 2018”. It doesn’t appear that Twitters pushing too hard to apply it in 2019 either.

But Twitter does want to clarify that high profile users are not totally exempt from its policies:

“We want to make it clear today that the accounts of world leaders are not above our policies entirely. The below areas will result in enforcement action for any account on our service (without consideration of the potential public interest value in allowing the Tweet to remain visible behind a notice):

In other cases involving a world leader, we will err on the side of leaving the content up if there is a clear public interest in doing so.”

Basically, unless a world leader or similar really crosses the line, Twitter’s probably not going to take action. So don’t be too upset when they break the rules and seemingly get away with it.

Is that the right approach? It’s hard to say – on one hand, Twitter can provide a connection between world leaders and their constituents like no other platform is able. That can be hugely beneficial – but then again, it could also be used for negative purposes, like spreading hate and fueling division.

Like most social platform decisions, no call, or the avoidance of taking a hard stance, errs on the side of optimism and community benefit, which inadvertently enables the worst elements to fester.

And then there are also the engagement benefits to consider. Do you think Twitter benefits from being the go-to platform for world leaders to voice their thoughts on any and every issue that strikes them, at any time?

How you view Twitter’s stance will come down to your personal leaning, but it does seem to be an area that’s still not clarified – at least, not to the degree where people can comfortably know what will qualify as crossing the line.