After expanding access to its updated search ads offering back in July, Facebook is now making search ads available to all businesses, while its also adding search ads to its Automatic Placements option.

“All new ad campaigns using Automatic Placements will automatically include the Facebook Search Results placement. You can also manually select the placement when setting up your campaign. Once you opt-in, ads will be eligible to appear on search result pages which includes general search and Marketplace search – and will both respect the audience targeting of the campaign and be contextually relevant to a limited set of English and Spanish search terms.”

The new search ads are designed to “fit the experience on the given search results surface”, whether that be general or Marketplace. You can see an example of the new Marketplace search ads below.

Advertisers who don’t want their ads to appear in search results will no longer be able to use Automatic Placements, and will instead need to manually de-select Facebook Search Results and/or Marketplace placements in their targeting.

Facebook initially flagged a re-launch of its search ads option last December, after it removed search ads back in 2013. With limited ad space available in News Feeds, Facebook has been exploring new ways to maximize advertiser potential, without overwhelming users with too many ads. Up till now, search ad access has been limited, but it seems that Facebook is now confident that it can use search ads as a viable option, which can help drive improved business results.

Facebook has been warning investors for the last few years about a potential slow down in ad revenue growth due to limited ad space. Back in 2017, Facebook said that it anticipated its revenue growth would slow down “meaningfully” as it reached peak ad load in Feeds. As a counter, Facebook has been looking to grow its ad opportunities in WhatsApp, Messenger and Instagram, which, for Instagram, has been successful, though the opportunities in its messaging platforms are also somewhat limited.

That’s then lead to Facebook exploring new opportunities. As another example on this front, and as reported by AdWeek, Facebook is also exploring ad placement in the Groups tab feed. 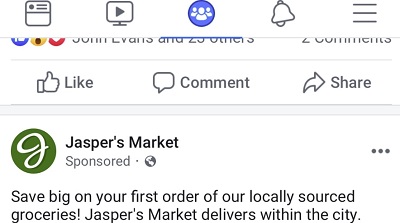 Will that get to be too much? Will Facebook users get annoyed by these additional ad placements?

It’s difficult to say, though it would seem that most Facebook users are now accustomed to ads, and that adding them into new surfaces won’t have a significant impact.

The question then is whether the new placement options will be effective, which, at this stage, there’s not a lot of data to support, though according to Facebook:

So there may be potential there. If you want to use Automatic Placements, you’ll find out one way or another.