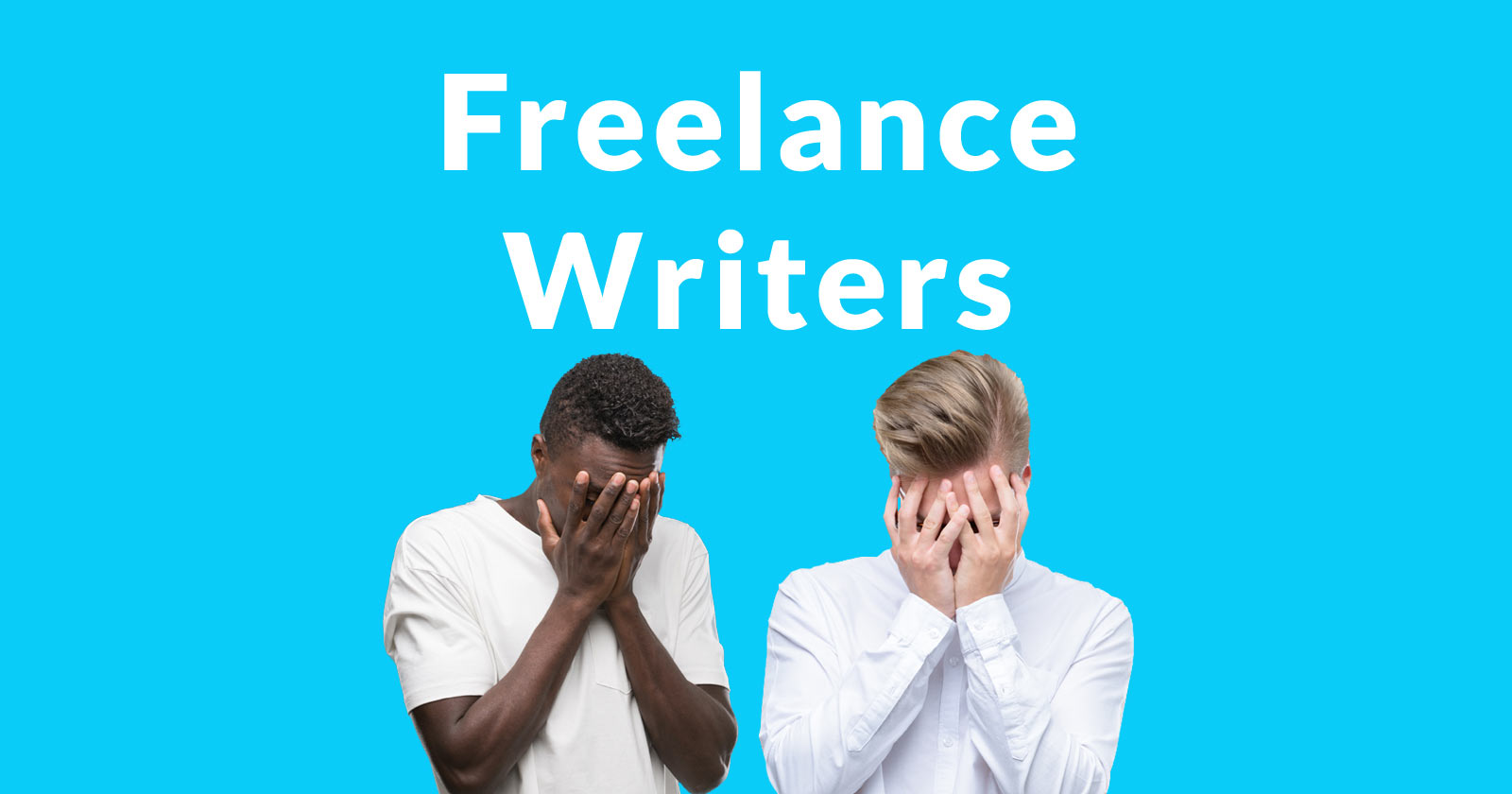 ” width=”710″>One person tweeted: “It doesn’t matter what profession it’s aimed at. The effects will be devastating for freelance writers in CA, and you should listen to them instead of ruining their livelihoods.”

According to the Hollywood Reporter and tweets on Twitter, many freelancers are having a meltdown over this law.

“…the exemption for freelance journalists …contains what some say is a potentially career-ending requirement for a writer to remain a freelancer: If a freelance journalist writes for a magazine, newspaper or other entity whose central mission is to disseminate the news, the law says, that journalist is capped at writing 35 “submissions” per year per “putative employer.” “

Miscommunication May Have Led to Freelance Cap of 35 Articles

A Twitter discussion between the laws author, Assembly Woman Lorena S. Gonzalez (@LorenaSGonzalez) and Randy Dotinga (@rdotinga), of the American Society of Journalists & Authors, who attended feedback meetings when the law was being crafted highlighted how both sides, freelancers and legislators, had not fully communicated.

“We agreed to make it 35 & broaden the language on submissions. I left a meeting w/ people agreeing. I know there were subsequent emails w/staff. You weren’t involved with that? Not to redirect all the very kind & effective comments about how stupid I am, just simply stating fact.”

To which Randy responded:

“I checked our notes: The bill had submission cap at 25. We met with you and discussed submission cap and bill language. 35 didn’t come up. I asked if you could do a cap of 52 if our coalition would stand down and support the bill. You said no…

…then 1 of your staff members emailed me about revised language with 35 cap, among other things. Reply: “We would, of course, prefer to see a higher cap, but we do appreciate that it has risen to 35.” I wanted to be friendly and figured the ship had sailed on the 35 cap”

“We discussed a 35 cap and then talked at length about broadening the definition of submission. We did both in the language.I was actually in that meeting with you.”

“We don’t recall 35 coming up at our meeting, and it’s not in our notes… That being said, I could be wrong or we could have miscommunicated.”

According to Randy Dotinga (of the American Society of Journalists & Authors), he tweeted that there are exemptions.

“There is a business to business exemption in the law with several criteria that you must meet. But even if you meet the criteria, you may still be blacklisted if your client doesn’t want to deal with figuring all this out. It is on them to follow the law.”

According to Randy, the law only affects writers in California.  He also tweeted that this law does not affect marketers. It only targets journalists.

“And marketers! I can write hundreds of press releases on a freelance basis and it’s no problem. But I must be put on staff or sacked if I write 36 freelance columns about the homeless…”

“We should go back to Borello. Journalists are protected by the First Amendment and the state constitution. Marketing writers have no limitation on their work as freelancers per #AB5, yet journalists who write do. Does that kind of targeting seem constitutional to you?”

This is what the law says:

“The bill would exempt specified occupations from the application of Dynamex, and would instead provide that these occupations are governed by Borello.

These exempt occupations would include, among others, licensed insurance agents, certain licensed health care professionals, registered securities broker-dealers or investment advisers, direct sales salespersons, real estate licensees, commercial fishermen, workers providing licensed barber or cosmetology services, and others performing work under a contract for professional services, with another business entity, or pursuant to a subcontract in the construction industry.“

“California is capping freelance writer articles at 35 a year. I could pass that in a month. It’s absolutely ridiculous that the government here wants to hurt people who choose to freelance and have a more flexible career.”

She also tweeted how this impacts her as a full time student:

The author of the California law tweeted that she was open to working to improve the law. She cautioned that any changes won’t be added before the law goes into effect.

“I will continue to work with freelancers, the industry & unions that represent writers to see if there are further changes that should be made, especially for digital quick jobs. But, this won’t get resolved just on twitter. And it can’t happen before January 7…”

Nevertheless, many are feeling anxiety about this new law. One freelance journalist tweeted:

“Every single freelancer writer I know in CA is more terrified of this than we were of Trump’s tax bill, which was awful for us. Every non CA freelance writer I know is incredibly grateful they don’t live here and aren’t subject to this…”

There seems to be a lack of clarity at this point in time.

On the one hand, as seen in the tweet by Randy Dotinga cited above, there is the interpretation that certain business types are excluded. 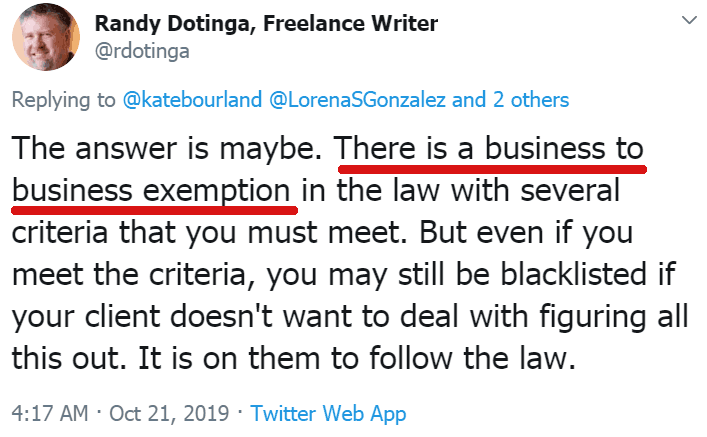 That would seem to be like outsourcing work to a temp staffing company. Can a journalistic enterprise outsource their journalists? As Randy observes, the seemingly multiple ambiguities in the laws may force companies to stop hiring freelancers.