Pinterest Now Up to 322 Million MAU, Revenue up 47% YoY in Latest Report

Pinterest Now Up to 322 Million MAU, Revenue up 47% YoY in Latest Report

Pinterest has posted its latest performance update, showing solid increases in both usage and revenue for the third quarter of 2019.

First off, on users – Pinterest added 22 million more monthly active users in the quarter, taking it to 322 million overall. 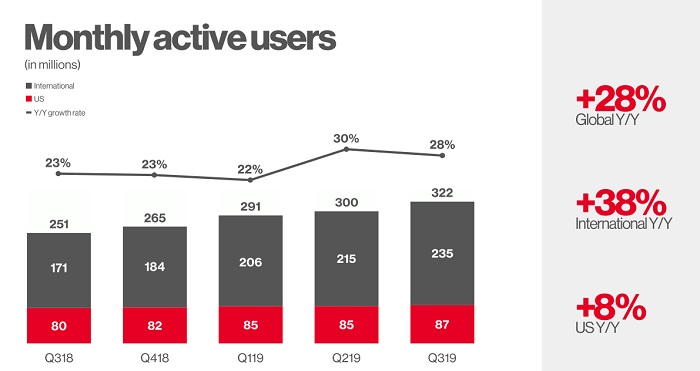 As you can see, that equates to a 28% YoY increase, while usage outside the US is growing at an even faster rate. For comparison, Snapchat added 7 million more daily active users in Q3, while Twitter added 6 million. Facebook added 36 million MAU in the same period.

The strength of Pinterest’s growth outside the US is significant, in that it underlines the platform’s potential for ongoing expansion, as its reaching new markets where it’s only just starting to build momentum. Pinterest says that it saw double-digit growth in all international countries except Canada, Iceland, and New Zealand for the quarter.

And in addition to this, Pinterest has also expanded its ad offerings as well:

“We now sell ads in 28 countries, up from 19 at the end of Q2. New markets in Q3 include Cyprus, Czech Republic, Greece, Hungary, Luxembourg, Malta, Poland, Romania and Slovakia.”

That’s contributed to improvements in the platform’s ‘Average Revenue Per User’, which is up 14% year over year. 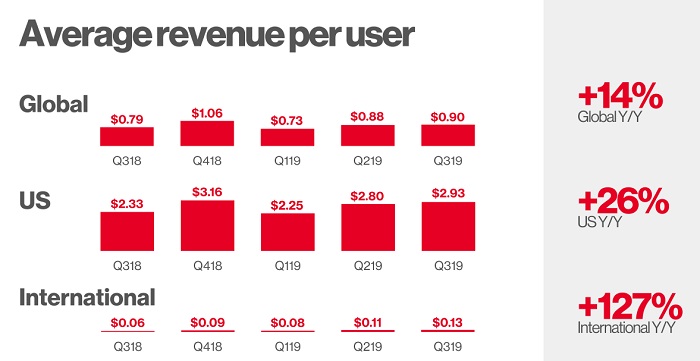 On the overall revenue front, Pinterest posted a 47% year over year increase to $280 million. 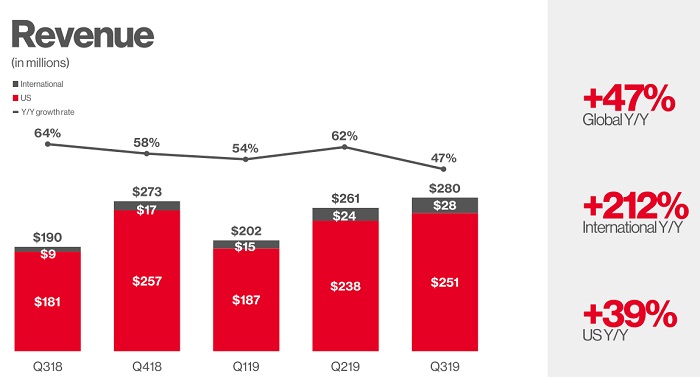 That’s a slower growth rate than previous quarters, but it’s still a steady and encouraging rate of growth, particularly when combined with the aforementioned ARPU increase.

Pinterest specifically notes that its focus on eCommerce is yielding improved results, with more merchants uploading their product catalogs to the platform, helping to connect more users with products they can buy via Pins.

“We made Pinterest more shoppable in Q3 by uploading 75% more merchant catalogs than in Q2, expanding Shopping Ads internationally and working with commerce platforms, including Shopify, to introduce merchants and advertisers onto the Pinterest platform.”

Pinterest will continue to evolve its on-platform buying options, making this an even bigger focus in future, and enabling it to capitalize on its capacity as a product discovery and purchase engine.

Of course, Pinterest still faces many challenges. Google, for example, recently launched its new ‘Style Ideas’ option through Google Lens, which functions in a very similar way to Pinterest’s own Lens tool.

As Pinterest continues to encroach on Google’s territory, via product discovery and search, you can expect Google to keep pushing back with similar tools, while Amazon will also be watching very closely. The larger Pinterest gets, the more the incumbents are going to fight it for market share – which could, eventually, slow Pinterest’s growth and make it difficult for the platform to compete.

But that hasn’t happened yet, and the indications would suggest that Pinterest is becoming more functional and improving the relevance of its results, which will keep users coming back.

The numbers here are strong, and while those ongoing concerns will remain, Pinterest does look to be on the right track.