Well, don’t get too excited, they won’t be coming till 2020 (if they make it through at all). Also, an edit option is not among them, but Twitter’s VP of Design and Research Dantley Davis has shared a list of five new features that he’s ‘looking forward to in 2020’.

Of course, ‘looking forward to’ doesn’t mean these are definitively on the way, but given the source, it’s a pretty good probability that these will be rolled out within the next six months.

1. Remove me from this conversation

This is a fairly basic option which would enable you to remove yourself from a tweet exchange, the same as you can currently with Twitter DMs. At present, there’s no way to detach yourself from a conversation if you’re directly mentioned or tagged in an image – though you can mute the conversation which has similar effect. This would provide a more clear separation, which could help you to extricate yourself from spam taggers.

This is an interesting one – on initial consideration, there wouldn’t appear to be a lot of instances where you don’t want what you share via tweet to be amplified. I mean, you’re tweeting it for a reason, right? Because you have something to share. But when you’re replying to someone directly, and maybe you don’t want that taken out of context, it could be helpful to turn off retweets. Or maybe, if a tweet of yours is blowing up for the wrong reason, you might be able to turn retweets off after the fact. Removing the option to retweet could potentially also prompt more direct engagement. If you can’t retweet or quote tweet someone, you might be more inclined to reply to them about it instead.

3. Don’t allow people to @mention me without my permission

Another safety measure – this would mean that you could stop people adding you to a tweet thread at all unless you approve them to do so. That could be helpful for those dealing with bullying or abuse, or to get rid of trolls who are only mentioning your profile to push your buttons. The option would be lesser than blocking them outright, but another option to give you more control over your on-platform presence.

4. Remove this @mention from this conversation

This sounds similar to the first option, but for other people in your tweets (presumably you wouldn’t be able to remove @mentions from other users’ tweets). Maybe the person has told you they aren’t interested in being part of the discussion anymore, so you can save them from future notifications, or maybe you’ve made a mistake in your @mentions within the tweet and you want to edit it (kind of edit tweets, sort of). Davis himself actually incorrectly tagged monitoring company Mention in his tweets (@mention), so maybe that was an example of where a tag could be incorrectly applied and you might want to remove it. Or maybe you want to maintain an in-tact tweet thread, but you no longer want to keep the mention (blocking removes previous tweets).

5. Tweet this only to: hashtag, interest, or these friends

This isn’t the first time that we’ve heard about this one. Last month, Twitter’s head of product Kayvon Beykpour discussed the same in an interview with The Verge, which was then followed up by this tweet poll posted by Twitter product designer Brittany Forks. 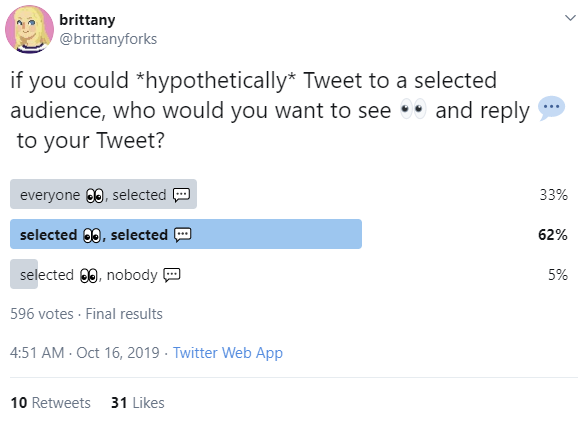 The option, as noted, would enable you to select specific audiences for your tweets, which could provide a whole new range of considerations for tweet communication, enabling more enclosed chats and discussions that don’t flood the feeds of your other, less interested followers.

In addition to these five ideas, Davis also shared one more interesting potential option, which makes a lot of sense:

These are some good additions, which would give Twitter users more control over their conversations, while also potentially opening up whole new use cases for the platform. Again, there’s nothing definitive here, Davis hasn’t said that these will be rolled out. But they offer some interesting food for thought on potential tweet additions.

Also, I wonder how Twitter’s tests of its ‘conversational’ updates, which it first discussed back in January, are going?