After trying them out in several markets over the last year, Facebook has this week announced that it’s going to give more publishers in even more regions access to its ‘Breaking News’ post tags. 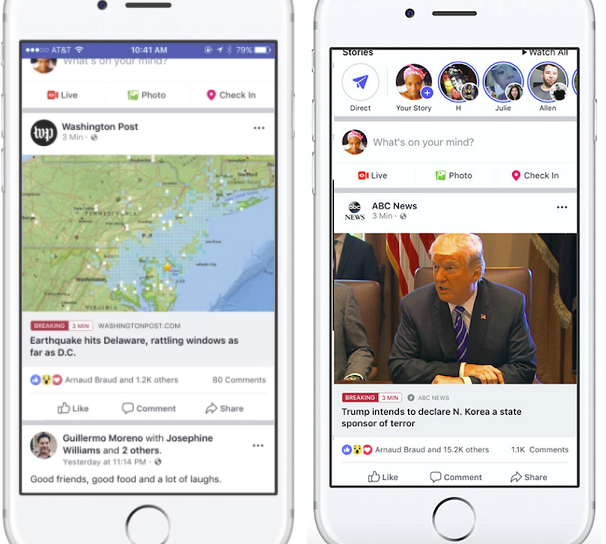 “Over the last several months we ran a test that allowed more than 100 news publishers from North America, Latin America, Europe, India and Australia to identify and label stories as “breaking news” on Facebook. We found that people engaged more actively with stories marked as breaking news, showing us that this product helps people find news that’s important to them.”

Expanding on this, Facebook says that its breaking news tags will now be made available to selected publishers in Switzerland, Italy, Portugal, Ireland, Singapore, Hong Kong, New Zealand, Argentina, Chile, Peru, Brazil, Colombia, and Mexico. Facebook will also give more publishers in regions where the tags are already available access to the tool.

As a re-cap, Facebook’s breaking news tags, which are displayed in News Feeds as above, enable selected publishers to apply the ‘Breaking’ tag to a chosen post of theirs once per day. Publishers can then set how long the story should be marked as ‘Breaking’ (up to six hours max), making it stand out more in feeds.

But while the chosen posts do feature the prominent, red ‘Breaking’ tag, the tag itself has no direct impact on a post’s News Feed ranking.

But even without a News Feed boost, Facebook says that the ‘Breaking’ tags have still helped improve post performance.

“In the test period, we’ve seen that breaking news posts about politics, crime, disaster, and business perform best. We’re using data like this to help publishers understand how to use the label to connect people with the breaking news that they need to see most.”

Facebook’s also improved its third-party integrations, enabling publishers to apply Breaking News tags via Social News Desk and SocialFlow, while it will also now allow publishers to add the breaking label after a post has gone live.

The expansion of Facebook’s Breaking News labeling may also link into the roll-out of Facebook’s dedicated News tab, which is now being tested among selected users in the US.

News coverage has traditionally been an area where Facebook has tread cautiously, but with its more recent stance on political advertising on its platform, and CEO Mark Zuckerberg’s statements on its role in the facilitation of free speech, it seems that Facebook is looking to take on more of a role as a news provider.

I mean, it already is – research shows that the majority of Americans now get at least some news content from Facebook. And if that’s the role the platform is playing, Facebook looks set to lean into it, and cater to user demand.

That may not be a good thing for democratic process, given the proliferation of fake news reports and political memes on the platform, but if Facebook can work to better educate digital users, and improve access to information, like breaking news reports, it could still be of significant benefit.