SEO Is Everyone’s Responsibility: 5 Tips to Get Non-SEOs Bought Into SEO via @Kammie_Jenkins

SEO Is Everyone’s Responsibility: 5 Tips to Get Non-SEOs Bought Into SEO via @Kammie_Jenkins 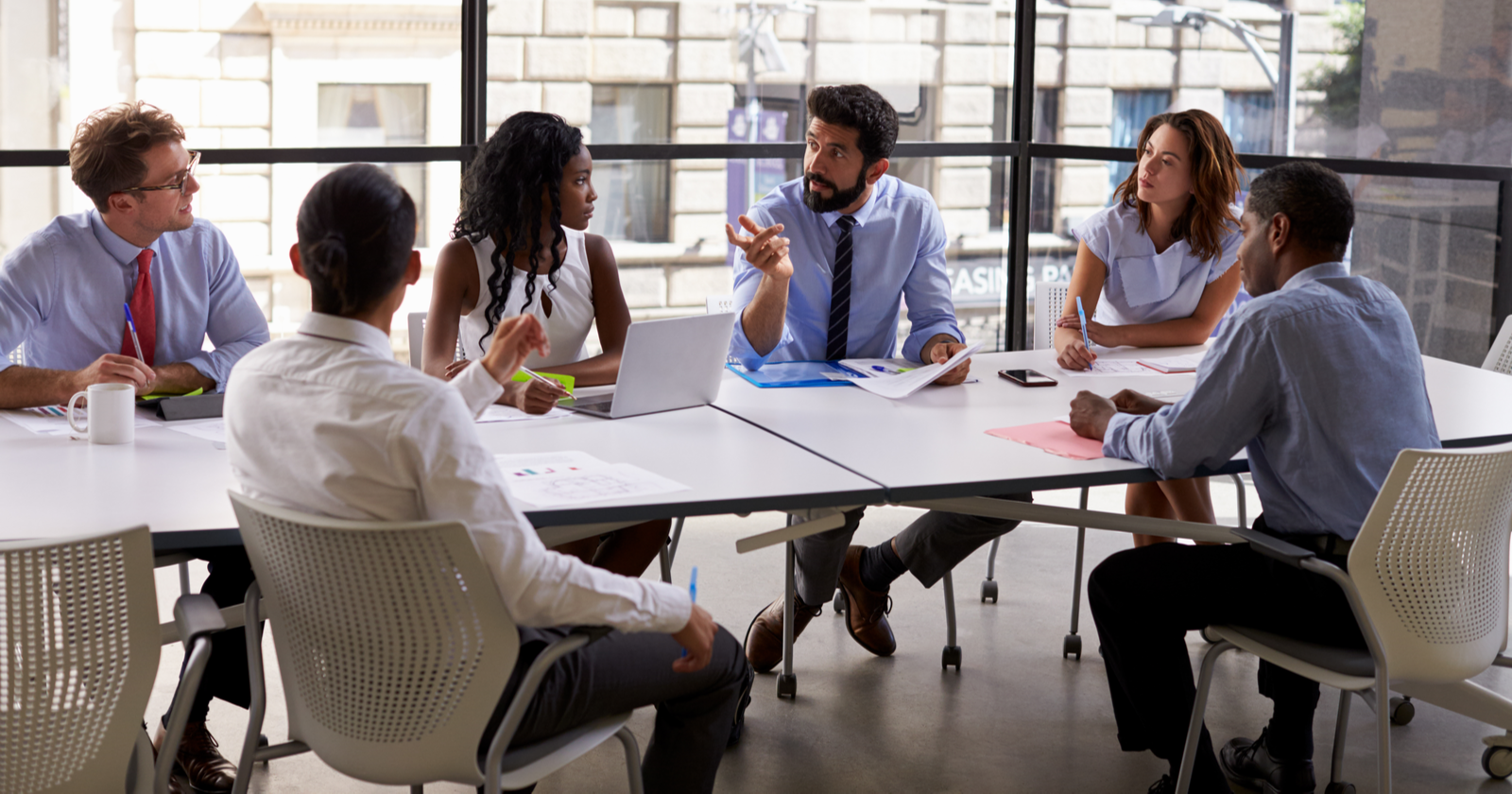 Not to be pessimistic, but SEO can be an incredibly frustrating job.

It didn’t take very long working in the industry for me to realize that SEO professionals were the outsiders.

Our success often relied on other teams, not our own, so we were relegated to asking for favors.

At best, these requests would make it on the list (albeit usually close to the bottom). At worst, they’d be completely ignored.

I often referred to this as “yelling into a black hole.”

My advice and requests went in, never to be seen again.

That’s why I felt so validated to read Jessica Bowman’s book, “The Executive SEO Playbook”. In it, she says:

“The root problem is that everyone needs to do SEO, but the only people who have it on their performance review goals are members of the SEO team. This makes SEO tasks, for [other departments], more of a favor than a must-do activity. Most are avoiding this type of extra work in order to hit a timeline, knowing they can ‘fix it later,’ but not realizing it is often exponentially more expensive.”

That’s when it clicked.

For so long, so many companies have been thinking about SEO as its own channel.

In reality, it’s a consideration that can help search engines and searchers discover what your other departments are creating (i.e., code and content).

This means that SEO is everyone’s responsibility.

SEO as a Second Language

I recently heard Jennie Baird, SVP of Product & SEO Strategy at News Corp, explain SEO as “A second language that everyone in the organization needs to be conversant in.”

We’re not trying to make everyone SEOs. We do, however, want non-SEOs in our organization a little more SEO-aware.

The byproduct? Our SEO metrics will likely improve.

To accomplish that, here are five tips you can try.

1. Give Them SEO KPIs

A lot of the conflict between SEO and non-SEO teams stems from opposing (or rather, seemingly opposing) incentives.

The project management team’s success is being judged on how quickly they can get something launched, but this is often antithetical to the SEO’s goal of preserving search traffic (e.g., a fast launch may mean there’s no time to do redirects).

Or maybe Infrastructure and Finance want to use client-side JavaScript because it’s cheaper, while SEOs want server-side rendering because it puts less burden on users and is easier for Google to access.

As long as non-SEO teams see your SEO asks as at odds with what they’ve been tasked to do, you have little hope of getting them to help you.

The trick is getting them to see your SEO KPIs as not only not-opposed to their goals, but even as something they’ll want to adopt themselves.

One way to get non-SEO teams to adopt SEO KPIs is for that directive to come from the top down.

Your Director or VP who oversees that department would need to see the merit of giving their team SEO KPIs and rolling it out themselves.

When possible, this can be a great option. It’s much easier to get other departments to care about SEO best practices when that’s part of how their performance is judged.

But how common is that? 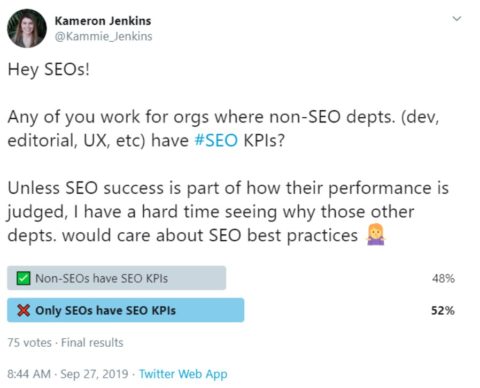 Interestingly enough, SEOs split about down the middle.

Since so many SEOs are in organizations where they don’t have the positional authority to roll out SEO KPIs to non-SEO departments, is getting non-SEOs to consider SEO best practices even realistic?

Or will SEO always be “not my job” to non-SEOs?

If you’re in that camp, I think the next tip might help.

When it comes to getting buy-in, the proof is in the pudding.

One of the best ways to get what you want, in SEO and in life, is to show the benefits of what you’re suggesting.

It’s easy to reject an opinion. It’s much harder to reject something you can see will objectively benefit you.

If you work on a crawl budget project, for example, you’ll likely get Google to index more of your important pages.

As the SEO, your KPI might be something like “increase the quantity of important pages indexed by X,” but guess what? That also will likely help the content team reach their goal of “increase traffic by X.” 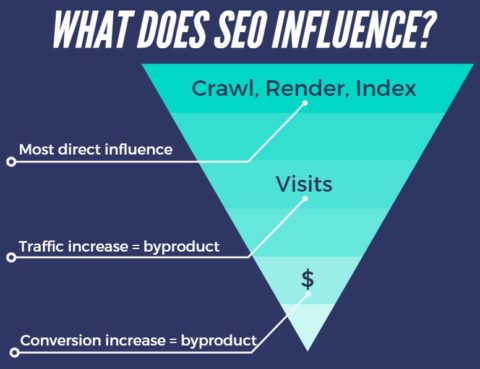 Making these connections can help flip the conversation from “Why would I work toward another team’s goals?” to “This other team’s goals help me achieve my own, therefore it’s in my best interest to care about SEO.”

Derek Gleason, Content Lead at CXL, put it this way:

“I’m officially a content person, but we know that ~80% of our traffic comes via search, so content KPIs like traffic and leads tend to live and die by organic search performance.”

One caveat is if they haven’t bought into SEO, it may be difficult to show them the benefits of SEO (because those haven’t been realized yet).

If this is the case, adopt a “test and learn” model, as Craig Harkins, Manager of Global SEO at IHG, recommended to me.

Test what you’re proposing on something small, share the results with the team in question, and allow them to see why they should roll out your suggestions on a larger scale.

You can’t get buy-in from non-SEOs if they don’t understand what you’re talking about.

SEO has a language all its own, which makes it all the more important to be mindful of how we explain things to our non-SEO counterparts.

Something that’s common in your vernacular may be foreign to another department, or even more confusing, the same word could mean different things to both departments.

I can’t stress this enough: you’re not helping anyone by using jargon.

Use layman’s terms, and even when you can’t, break down your terminology with examples, analogies, and anything else that will help make the concept click.

But by definition, a conversation goes two ways. Not only do you need to speak clearly, but you’ll also need to understand the other team’s foreign terminology.

The best piece of advice I can give here is that when in doubt, ask questions!

The better you understand each other, the more likely you’ll be able to see eye-to-eye.

To quote Jennie Baird again, it’s great if everyone can become conversant in SEO as their second language.

However, some organizations have even gone a step further and embedded SEOs into their web product and editorial teams.

So instead of SEO advising and asking from the outside, give SEOs a built-in seat at the table. This makes it easier to fit SEO recommendations into the schedule.

The “where does SEO live?” question is a tough one, and after a lot of thought, I don’t believe there’s one right answer to this.

The point is, good things can happen when SEOs aren’t just on the outside looking in.

At this year’s MozCon, Heather Physioc talked about one of my favorite subjects in digital marketing: interdisciplinarity.

Interdisciplinarity is the concept of combining multiple disciplines in pursuit of a common goal. For her, this looked like merging organic, paid, and content teams.

Eager to learn more, I joined her “Birds of a Feather” table discussion after the fact. Turns out, other SEOs are hungry for this information as well.

There were plenty of people who, like me, have struggled to get their non-SEO coworkers onboard with their SEO recommendations.

So we asked, without the positional authority to force the change, how can we get other departments to help us?

From that point on, the conversation became almost exclusively about friendship. In other words, when you don’t have positional authority to get other departments to do certain SEO tasks, your next best bet is to rely on your relationships.

This came up again in a recent webinar I hosted where we were discussing how to implement SEO in SEO-immature organizations.

“Think about it in the context of your own job. When someone comes up to you and asks you to do something that might not technically be your job, if you like the person, you’re probably more likely to say yes.”

It sounds so simple, but it’s true.

Take a genuine interest in your non-SEO coworkers. Make an effort to say hi in the hallway, take them out for coffee, or go visit their desk and ask them how their day is going.

As a bonus, establishing positive connections with your coworkers is good for you and your coworkers’ emotional wellbeing too (and let’s not forget which is more important)

Buy-In Wasn’t Built in a Day

If you’re an SEO in an organization that doesn’t involve you in important website decisions, doesn’t make time for your projects, and loops you in only after traffic has suffered, I get how deflating that can be.

But I sincerely hope that by implementing even one of these tips, over time, you’ll start to see progress.

It doesn’t happen overnight, but I hope the non-SEOs in your organization start to see SEO as their responsibility, too.