Hey, are you sick of scheduling your tweets through third-party management tools, and/or via TweetDeck?

Well, you’re in luck – this week, Twitter has officially confirmed that it’s testing a new option to schedule tweets within the tweet composer window in-app.

As you can see here, the new option – which will be made available to some users – would enable you to compose, then schedule your tweets to post at a chosen time, without ever leaving the composer window.

Here’s a look at the process in more detail – once you’ve composed your tweet, you’d tap on the three dots menu to the right of the lower functions listing. 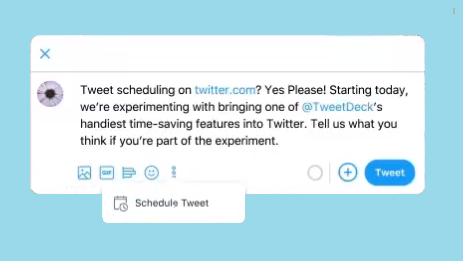 Select ‘Schedule Tweet’ and you would then be able to input the date and time that you want it to go live, while you can also change the time zone settings to ensure that it’s posted at the intended spot. 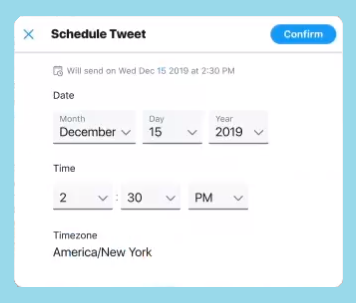 It’s an interesting addition to the Twitter app, but it’s not a new function by any stretch. As noted by Twitter, you can already schedule your tweets via various apps, and most social media managers would have an established workflow for such purpose. In this respect, adding it into the main Twitter app probably won’t be a significant addition – but then again, it does add extra functionality, which could be particularly beneficial when you’re trying to manage your tweets on the go.

It could also come in handy for quick response – and if it were to be combined with another current Twitter test, which would enable users to switch accounts within the composer, that could make it a handy, rapid response tool to have in your arsenal as required.

The new scheduling option was first spotted in testing by reverse engineering expert Jane Manchun Wong back in August, so it’s not a huge surprise to see Twitter officially confirm the option. But it will be interesting to see if and how people use it – as noted, Twitter is testing the functionality with a small group of users, but could look to expand it in the new year.