After months of testing, Twitter has now announced that is new ‘Hide Replies’ option will be rolled out to all users globally.

As shown in the above GIF, you’ll now have the option to remove any tweet replies, and better control your tweet engagement.

“Currently, repliers can shift the topic or tone of a discussion and derail what you and your audience want to talk about. To give you more control over the conversations you start, we tested the option for you to hide replies to your Tweets. We learned that the feature is a useful new way to manage your conversations.”

Those are some interesting insights into the actual findings from a test of this type, again showcasing Twitter’s transparency in such changes. Now if we could only get a similar rundown from Instagram on its hidden like counts tests.

As noted in the findings list above, and shown in the GIF, when you do choose to remove a reply, your tweet will get a small page-type icon in the bottom right corner: 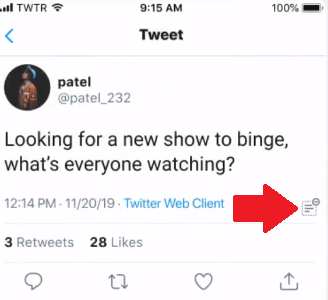 Any user will be able to tap on that icon and get a full list of replies which have been hidden, which means that it’s not a block, as such, but a means to keep the conversation on track, and remove abusive and/or unnecessary replies. That could prove to be a particularly beneficial process, as it can help to highlight unacceptable tweet behavior, and maybe make others re-think similar approaches.

And Twitter’s also looking to take the capacity to hide replies even further – in addition to manually hiding replies, Twitter Product Manager David Gasca says that they’re also working on new replies API, which would enable developers to create their own reply moderation algorithms. That could enable new tools and processes which hide tweet replies automatically “based on certain keywords, topics, or participants”.

Twitter Product Lead Kayvon Beykpour also says that they are “exploring providing even more control, such as letting you choose only specific people who can reply to your tweet”. That’s especially interesting within the context of other tweet options in testing which would enable you to share your tweets to selected audiences, as opposed to tweeting them out to everyone. It could be that, in 2020, we see Twitter take on a whole new personality in this respect, with both enclosed tweeting in certain groups, and the capacity to restrict your audience for engagement.

In a broader shift, such capacity makes sense – privacy, as Facebook has repeatedly stated, is where social media trends are headed, but it’ll be interesting to see how such can be applied to Twitter, which has traditionally been an open public forum. Will that increase engagement, as people will feel freer to express themselves in more limited capacity, or will it confuse the process and make Twitter even more complex and difficult to understand (especially for new users in developing regions)?

Either way, there are some interesting considerations within these various measures, which all stem from the announcement of hide replies being made available to everyone. In many ways, it’s just a first step, but providing additional control over your on-platform experience will be beneficial many users, and could help clean-up and improve overall discourse within the app.