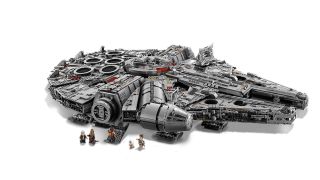 The Lego Black Friday deals are in full swing, so if you’re on the hunt for a new set, there’s never been a better time to buy. Lego is arguably the world’s most creative tool, whether you use it for prototyping or simply as a way to switch off, the humble little brick’s possibilities are endless.

The tactile nature of Lego combined with intricately detailed sets has made Lego hugely popular among adults and children alike in recent years. One of the most popular set themes is Lego Star Wars, with many fans placing the epic Lego Star Wars Millennium Falcon set at the top of their wishlists. However the 7,000 piece set is far from cheap, which is why we were super-excited to see it as part of a Lego Black Friday deal at John Lewis. The retailer has reduced the mega set by 15%, dropping it down to £548.67 – the lowest price we’ve ever seen!

Save at least 20% on great Lego sets at Walmart
Whether you’re into Harry Potter, Star Wars, Lego Friends, Lego City or Lego Creator, there’s a discounted set here for you. Walmart is offering at least 20% off these top Lego sets, so be quick if you don’t want to miss out on a brilliant deal.  View Deal