This is an interesting development amid the ongoing debate around political advertising on Facebook, and what should and should not be allowed in campaign ads.

Late last week, the Singaporean Government instructed Facebook to publish a correction notice on any updates in relation to a story about the arrest of an alleged whistleblower in the region. 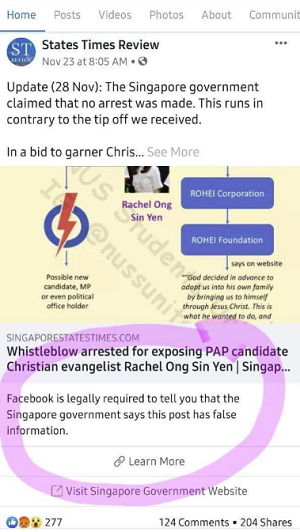 As you can see here, the post isn’t dismissed as ‘false information’, nor does it include a note that the information has been ‘disputed by fact-checkers’. Instead, the warning label reads:

“Facebook is legally required to tell you that the Singapore government says this post has false information.”

The post amendment note adds another wrinkle to the debate around political fact-checking, and what should and should not be allowed on social platforms, and Facebook specifically. The Social Network is the largest digital platform in the world, with reach to more than 2.4 billion people, and the relative influence that comes with that. And while Facebook has enacted content takedowns as directed by government organizations in the past (as per Facebook’s latest Transparency Report, the company took action on 17.8k cases of local law violations in the first half of this year alone), the addition of a specific note on a false report, as defined by a regional authority, raises further questions about how Facebook will go about handling such cases moving forward.

The amendment is actually part of a new law which was recently enacted in Singapore, and compels Facebook to publish corrections when directed to do so by the government.

As reported by BBC Asia:

“The law, known as the Protection from Online Falsehoods and Manipulation bill, came into effect in October, and it allows the government to order online platforms to remove and correct what it deems to be false statements that are “against the public interest”.

Penalties for violations of the new law range from fines to prison terms – and interestingly:

The implementation of harsher penalties for the use of bots in this way makes sense, and will certainly help to act as a deterrent, but the capacity for a government-affiliated group to essentially determine what’s true and what’s not could set a concerning precedent.

What if the US Government were to implement a similar measure? A warning label from the Government itself is likely not as effective a deterrent as a fact-check note from an independent organization. But still, it raises some interesting questions as to how social media communications can be regulated, and used to manage the flow of information to the general public.

Of course, there’s no such discussion of any similar regulations being implemented in other regions, and Singapore’s new law has been criticized by various groups as over-reaching and undermining internet freedoms. But it once again underlines the rising relevance of digital platforms as tools for communicating political information – and the potential dangers of such, with respect to the spread of false or misleading information.