Facebook has announced the launch of a new tool which will enable people to transfer their Facebook photos and videos over to Google Photos, in what Facebook says is the first step in its new data portability approach, which, eventually, will provide users with more control over all of their Facebook data.

“At Facebook, we believe that if you share data with one service, you should be able to move it to another. That’s the principle of data portability, which gives people control and choice while also encouraging innovation. Today, we’re releasing a tool that will enable Facebook users to transfer their Facebook photos and videos directly to other services, starting with Google Photos.”

Data portability has become a key focus in recent times, with the capacity to be able to control your data not only enabling more oversight of your individual activity, but also providing a means to be able to transfer your info to other platforms, improving competition online, and facilitating the growth of new services.

Which is also why Facebook has been reluctant to open up its user data banks in the past. As noted by TechCrunch’s Josh Constine, who has long advocated for improved data portability measures, over time, Facebook has been very keen to suck whatever data it can from other services and tools, but it’s kept its own insights sealed off, as a means to blunt potential competition.

Earlier this year, Constine called on the FTC to consider implementing new measures to impose data portability rules on Facebook, “to let you export your friend list to other social networks in a privacy-safe way”, which would not only provide more control over your personal info, but also better incentivize Facebook to improve its own tools and offerings.

“This would allow you to connect with or follow those people elsewhere, so you could leave Facebook without losing touch with your friends. The increased threat of people ditching Facebook for competitors would create a much stronger incentive to protect users and society.”

Facebook, for its part, has been exploring data portability options within its broader set of measures focused on appeasing the FTC, and avoiding regulation. Back in September, Facebook published a white paper which outlined the various considerations in building improved portability tools, setting the table for a new approach to such process. 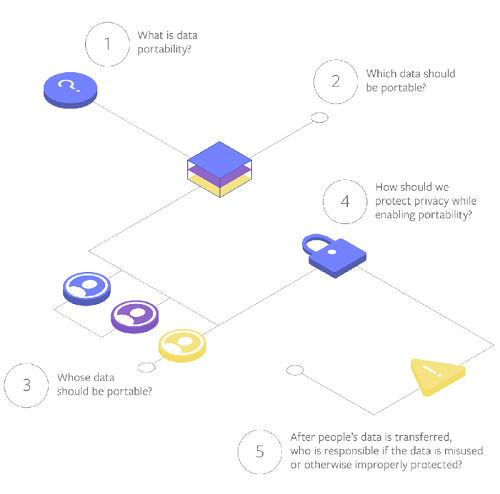 This new photo transfer tool is the first stage of that new approach – though it won’t be available to everyone just yet.

“The photo transfer tool we’re starting to roll out today is based on code developed through our participation in the open-source Data Transfer Project and will first be available to people in Ireland, with worldwide availability planned for the first half of 2020. People can access this new tool in Facebook settings within Your Facebook Information, the same place where you can download your information. We’ve kept privacy and security as top priorities, so all data transferred will be encrypted and people will be asked to enter their password before a transfer is initiated.”

It seems like a good first step for Facebook, and a goodwill gesture, indicating that it is genuinely looking at ways to provide users with options, after years of keeping everything well and truly locked up.

And there are a lot of data security considerations to take into account – especially given Facebook’s more recent track record on data leaks and unapproved access. Given this, it makes sense for Facebook to start small, with photo and video transfers, with users in Ireland only. From there, we can see where Facebook looks to take the data portability conversation next.