If you’re a photographer, this is the gear you need to do more

If you’re a photographer, this is the gear you need to do more 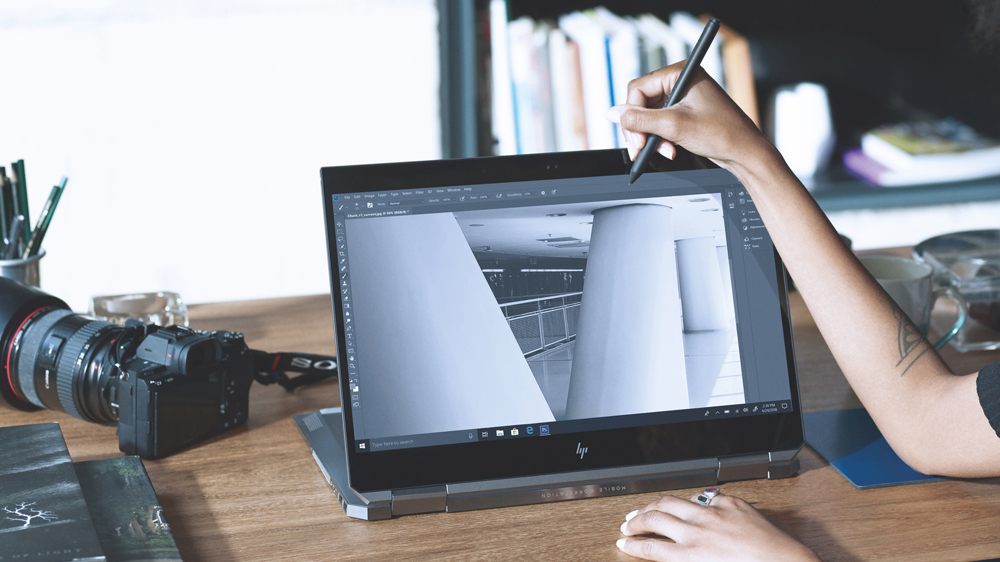 If you’re a photographer, do you choose a conventional laptop, or do you think outside the box? When on the road you need the best gear you can get hold of. And that’s why you need a HP ZBook.

There are many benefits with a convertible tablet PC, but chief among them is that you have one device to suit all purposes. If you’re processing photos on the train, you can use it as a conventional laptop. In the hand? With a stylus or your finger you can use it as a tablet thanks to a sensitive touch display. Showing a client content? Just use the screen and fold the keyboard back. And finally, if you’re at a desk, use the separately-available ZBook Dock to connect to an external display, keyboard and mouse all with a single cable thanks to Thunderbolt 3 technology.

You can even connect to dual-4K displays should you wish to – the ZBook series is designed to handle high-resolution displays with aplomb. The ZBook series is ideally complemented by the HP DreamColor Z27x G2 QHD Studio Display which offers 98 percent coverage of the DCI-P3 colour space.

The power to do more

The HP ZBook x2 is fully worthy of its moniker as the “world’s most powerful detachable tablet”. Running Microsoft Windows 10 Pro, the ZBook x2 has a full array of ports including HDMI, USB-C and also, importantly for photographers, an SD card reader. There are also the latest Intel quad-core processors up to Core i7. They won’t let you down, with up to 4.2GHz of Turbo Boost speed. HP’s Z Turbo Drive solid state storage drives (SSDs) are also four times faster than standard SATA SSDs for rapid-fire file access of even your biggest files. Plus, with up to 32GB of dual-channel memory, the ZBook x2 can handle all your intensive work in chunky apps. Fast charge tech will also help you ensure you never run out of charge when on the move.

If you want a more traditional laptop but one that still boasts the ultimate in flexibility, check out the HP ZBook Studio X360. The screen can rotate a full 360 degrees, so you can use it in tent or stand modes as well as in standard laptop mode. In addition to all the power of the ZBook X2, it boasts up to Intel Xeon workstation processors for ultimate power and even faster PCIe NVMe storage of up to 4TB.

The ZBook x2 also boasts a full-size keyboard and integrated stand so as well as the powerful specs under the surface there’s little difference between using one in laptop mode and having a traditional clamshell laptop. Unlike some rivals, the Bluetooth-connected keyboard stays active even when it’s detached, meaning you can keep in control even if your display is across the table being used to show your work to colleagues or clients.

Nvidia Quadro graphics ensure that your new ZBook will always have the power to perform graphically intensive edits as it powers the 15.6-inch (HP ZBook Studio X360) or 14-inch (HP ZBook x2) 4K IPS anti-glare multi-touch screen, the display also boasts HP Dreamcolor Studio Display technology, so your photo colours will look exactly as they should. The 10-bit colour display is chemically treated to feel like paper when you’re using the stylus and, what’s more, it supports 100 percent of the Adobe RGB colour gamut.

With HP Quick Keys on the ZBook x2, you can keep working in your favourite Adobe Creative Cloud apps without a keyboard; these are 18 handy shortcut keys located on the sides of the display which you can customise using the HP Create Control Panel. Just open the HP Create Control Panel and select Functions from the Tool list to customise them. You can even choose to customise them for a specific app like Photoshop should you wish. You can even select other keys to press to modify the functions you’ve created, too.

You’re also able to control other features from the Create Control Panel, such as your HP ZBook x2 Pen’s tilt sensitivity, double-click distance, button action and other settings.

We’ve covered the different types of stylus elsewhere, but the HP ZBook x2 Pen is a Wacom EMR model that can be used to quickly apply accurate photo edits thanks to 4,096 levels of pressure sensitivity.

When teamed with the HP Quick Keys, you can quickly get into your most-used Photoshop and Lightroom functions, such as levels, filters or Camera Raw. Or you can easily pan and zoom or jump into a full-screen preview. You’ll quickly get used to the precision you’re able to have with tools in Creative Cloud.

What’s more, the HP ZBook x2 Pen won’t let you down on the road – it doesn’t have a battery so unlike some digital pens and pencils, it never needs charging.

The ZBook 360 comes with a Wacom AES pen for ultimate precision and low latency. But, whichever you choose as a photographer, you’ll get the right results every time.

HP’s ZBook series of workstation PCs are designed from the ground-up for power, portability and creativity. Explore the HP ZBook range.