Figuring out why the performance of a PPC account has changed can be one of the most time-consuming tasks in PPC.

Not only is it a big time drain, but it’s also often associated with a fire drill, done at the urgent request of a boss or client who is demanding answers after something didn’t go as planned.

I’ll cover how a typical investigation is done and share free tools and scripts that can help speed up this process.

Of particular interest is Google’s just-announced ‘Explanations’ feature, which can be a great help when trying to find the culprit when things don’t go as planned.

A typical investigation can consume hours if done manually and usually follows these steps:

Step 1: Know You Have an Issue

We’ve all got a lot on our plates. So, chances are, you aren’t logging into all your accounts every hour.

That’s why it’s so important to have good monitoring in place so that you’ll get an alert if something is going on with an account.

If you don’t have good monitoring, rest assured your client will monitor things for you.

But that comes with a downside: they will yell at you

Also, by that point, things may have gone far off track.

So set up some good alerts and spare yourself that trouble.

You’ll look like the PPC rockstar you are if you squash a problem before it gets out of hand.

Step 2: Find the Best Place to Start the Investigation

Once you know that an investigation is needed, it’s time to find out where to start.

A big change in performance can come from the combination of many small changes or from some isolated bigger changes.

It helps focus your effort when you know where the biggest changes appear to have happened.

Notice I use the word “appear” because it is possible that a campaign with no top-level change actually had lots of positive and negative changes that canceled each other out.

The simplest way to go about this step is to rank campaigns by the biggest net change.

This is simple to do.

Turn on the date range comparison feature in Google Ads. Then filter for only campaigns with a minimum level of data and then sort them from biggest to smallest change.

Once you’ve identified the campaigns most responsible for the change, repeat step 2 but now by looking at the ad groups with the biggest change in each affected campaign, one at a time.

Then repeat this again for keywords, queries, ads, etc. After doing this you have a list of individual things that you might be able to fix.

For example, you’ll know which keyword had the biggest drop in conversions and be able to fix its issue. 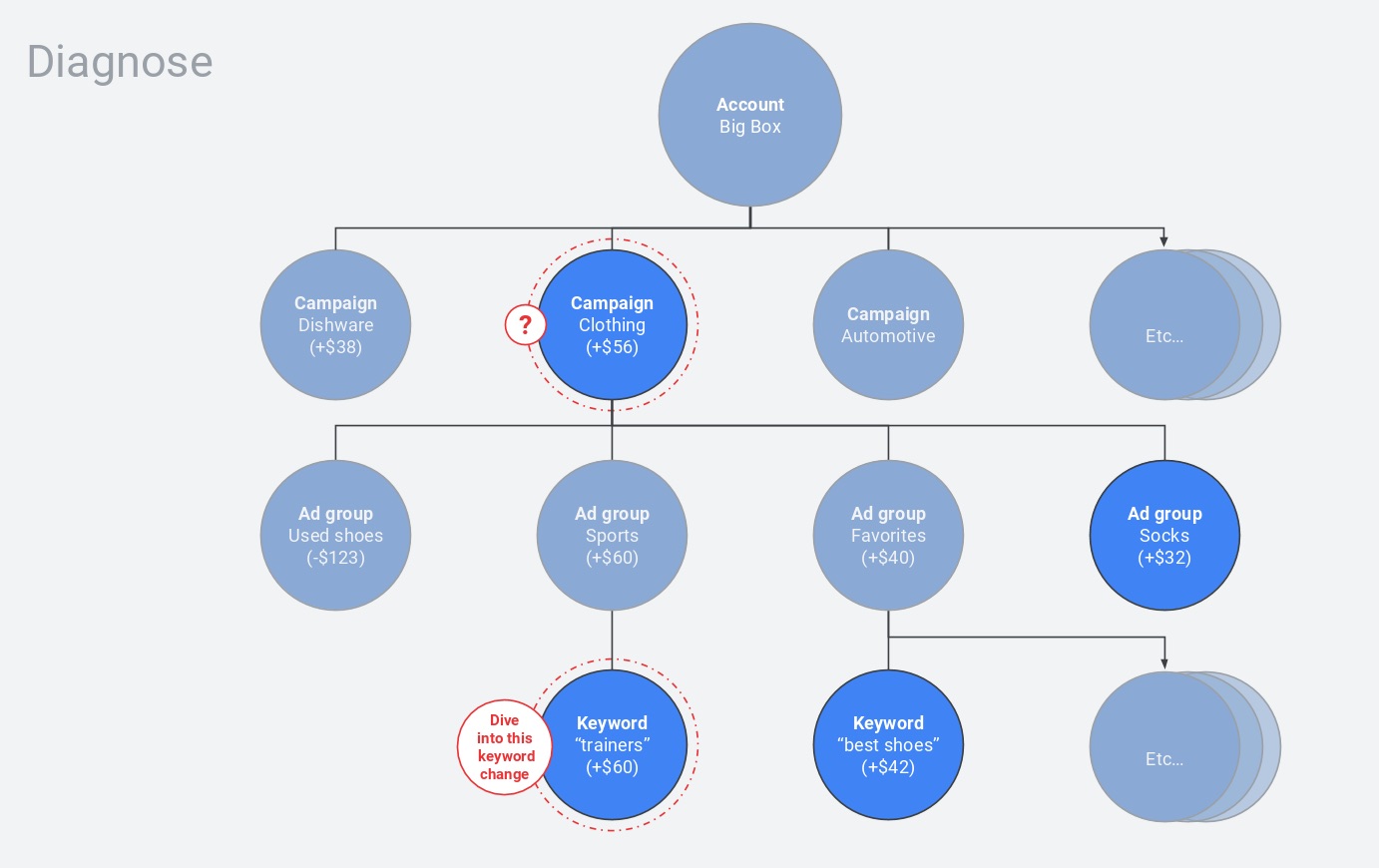 ” width=”1382″>This illustration shows the analysis one might do to find the main issue when an account isn’t performing the way it used to. By identifying the components with the biggest changes, advertisers can focus their efforts in the most important place.

Or you might find that an affected campaign has no keywords of special note and everything declined equally, indicating that the issue may be due to a campaign-level setting such as a budget change.

As you can see, this recursive step can be time consuming for larger accounts.

Step 4: Drill Down into the Metrics

When you’ve found the entities most responsible for a change, be they campaigns, queries, or something else, it’s time to investigate the underlying cause.

Looking at the numbers will help you hone in on the root cause. 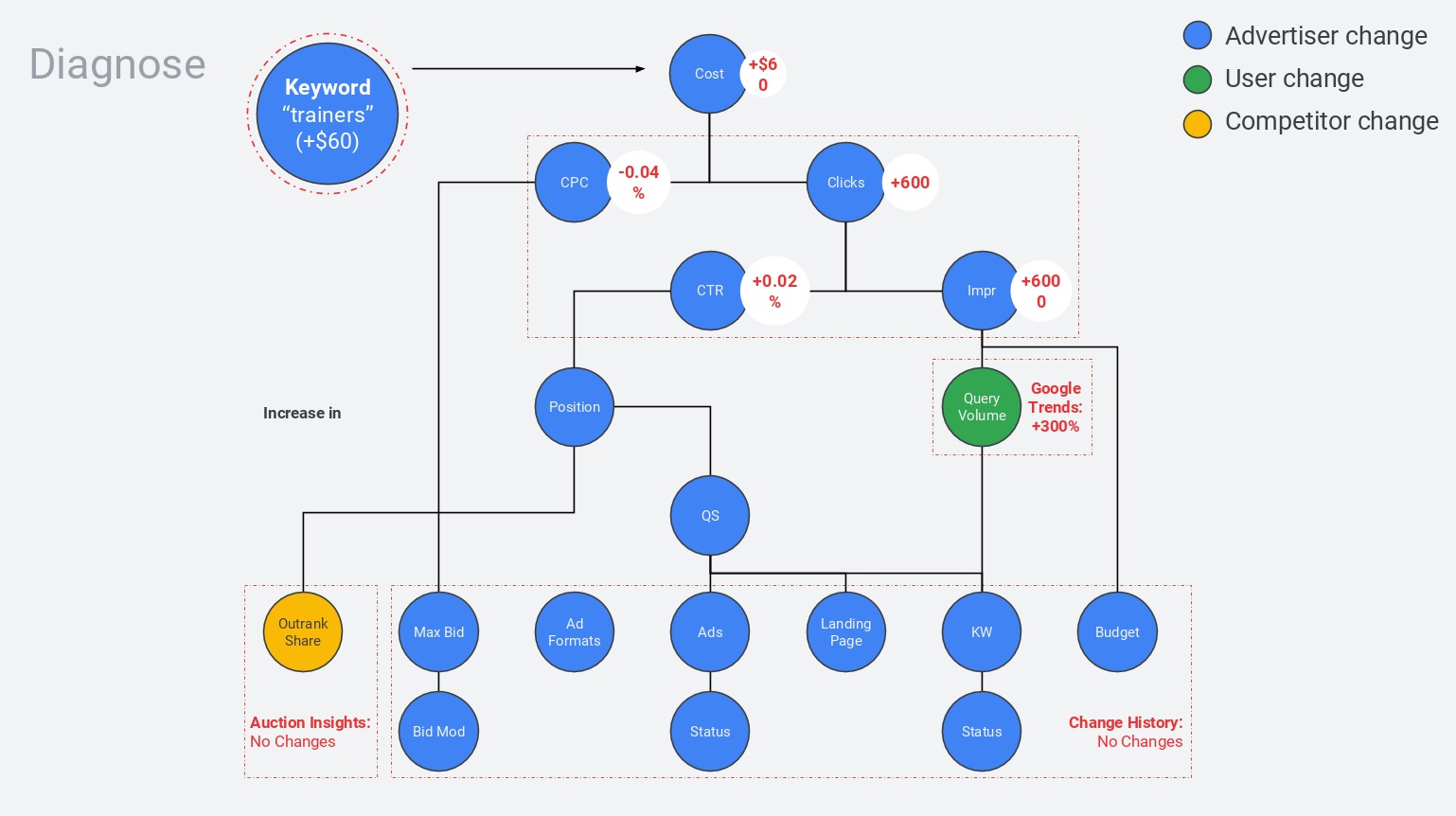 ” width=”1538″>To find out why something in your ads account is performing differently, you need to pull data from a variety of sources to come to a conclusion about whether the cause was a change you made, something a competitor did, or a change in user behavior. This illustration shows how complex this type of investigation can get when done by hand.

This isn’t easy and requires downloading a lot of data (even data from outside Ads, like Google Trends) and combining it in spreadsheets.

While the Google Ads interface shows metrics in a table, there are relationships that are easier to see in a cause chart, which is illustrated in both the above image from Google and the one below from Optmyzr (my company). 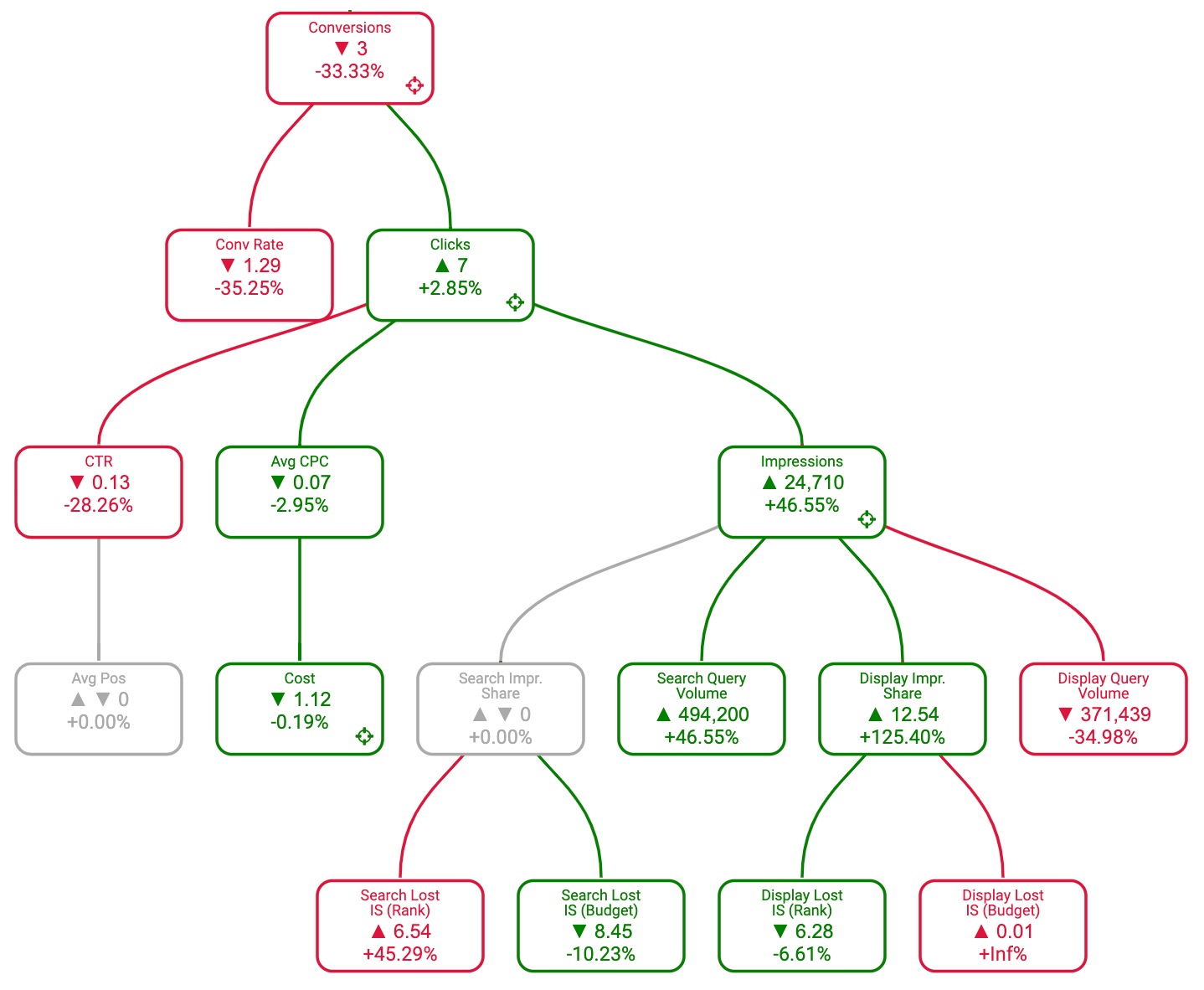 ” width=”1438″>This cause tree analysis shows the relationships between metrics and can help focus an investigation into why PPC performance changed.

Understanding at which stage of these connected metrics things have unraveled will help pinpoint the likely fix.

An advertiser whose conversions have decreased should look at clicks, impressions, average CPC, impression share, etc. to determine what caused the change.

Once you know the lowest level metric that was impacted, you can correlate that with a likely cause and know if the reason is due to something you changed, something a competitor changed, or a change in user behavior.

Say “impression share lost due to rank” increased, it could be that:

The solution, in either case, may be to raise bids or improve quality score.

But understanding what signal you missed can also inform your strategy for how to avoid the same mistake in the future.

The above steps are manual and time-consuming. Especially when you may have to repeat some of the steps of the process several times and collate a multitude of reports to do the analysis.

But luckily there are free tools that can speed up this type of investigation.

Let’s start with the very newest one from Google.

Google introduced ‘Explanations’ that help make sense of changes in performance. The details are well covered in their announcement.

The tool is great for doing a quick investigation when you know something has changed.

Note it doesn’t proactively tell advertisers what is important and it doesn’t send any alerts. I’ll cover a free tool that helps with that next.

What’s impressive is that Explanations are able to pull in data from some sources that are typically hard for third party tools or advertisers to pull in on their own using scripts, for example.

Specifically, search interest, auction activity, and change history are included in the analysis. 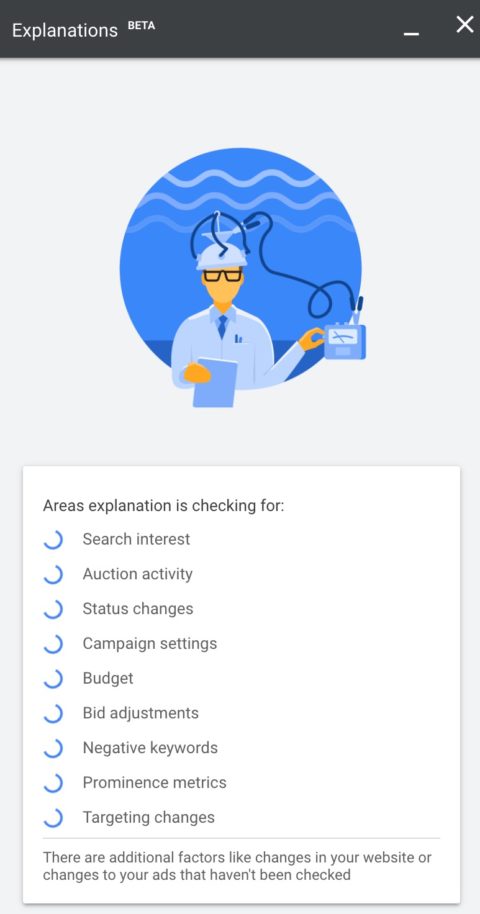 This is a great example of the power of using tools in PPC rather than doing things manually. You can do in seconds what takes most experienced advertisers about 30 to 60 minutes.

For now, it only works for campaigns with manual bids or ECPC bids. But I have no doubt that if the beta is a success, the capabilities will be expanded to more campaign types.

The downside of Google’s Explanations is that you have to actively seek out explanations.

It won’t just give you a list of all the things you should be paying attention to.

That’s where a Google Ads script can come in handy because it can monitor for unusual changes and automatically send an alert via email if something seems in need of a closer look.

Google has its own Anomaly Detector script which is particularly helpful with step 1 of the analysis: finding out you have a problem.

But if you want something that also integrates steps 2 and 3 and tells you where to start the investigation, try a script I wrote a few years ago, the Granular Anomaly Detector.

It’s based on Google’s code but adds a few additional settings that should be useful to PPC rockstars.

For example, you can ask the script to look at campaigns, keywords, etc., with big changes rather than just alerting if the whole account sees an anomaly.

An entirely different approach to finding out why an account is changing is with an Alexa skill we published last year.

It takes the idea of a cause chart and turns it into a conversational capability for Amazon Echo devices.

The skill can answer questions like “How many conversions did I have last week?” and then follow up when you ask it “Why did this change” with an answer that evaluates the underlying metrics that drive conversions.

Since it’s conversational, you can ask follow-up questions that dig deeper, like “why are my clicks down?” to get an answer about the next level of interrelated metrics like impressions and CTR.

Because the skill can’t access all the same Google data as Explanations can, it is more limited and won’t be able to tell you what specific competitors are doing, but instead may just hint at the fact that there is more competitive pressure on your account.

With so many factors going into running search ads, finding out when and why an account is suddenly not performing as before can require a massively time consuming and tedious investigation.

Even if you aren’t facing this problem now, it’s still wise to know the tools to streamline this process because when the issue arises you won’t have time to learn a new tool and your boss will demand fast answers and fast fixes.

All screenshots taken by author, December 2019